The following is a “for dummies” primer to the FRIDAY THE 13th films, written as a sidebar to my Halloween-for-Christmas movie marathon blogs of 2014. It is designed to “educate” the unfamiliar with the intent and timeline of these historical genre efforts. For more specific review and retrospect information on each movie in the series, please refer to those blogs.  THIS SUMMARY CONTAINS SPOILERS.

The FRIDAY THE 13th or JASON series is a long-running horror film cycle, divided into two categories or eras by serious fans. There are the “Canon” films, numbered 1 though 8, which are considered series gospel, for better or for worse, featuring mostly simplistic, reality-oriented slasher scenarios, with grizzly killings and suspense. And then there’s the “New Line Era” films, usually regarded by hardcores as out-of continuity, which are more elaborate, special effects-oriented productions. The original eight movie cycle was independently-produced between the years of 1980 and 1990, on what is known as “negative pickup deals” with Paramount Pictures. This means that the producers signed contracts with the studio, ensuring a certain sum of money would be paid out, upon delivery of each film in the series, with the ultimate box office profits split according to agreed-upon terms. The actual financing and production of the films was done independently, with the budget for each being usually in the neighborhood of one to three million.   The “New Line Era” were films financed and made entirely “in-house” at New Line Cinema between the years of 1992 and 2003. 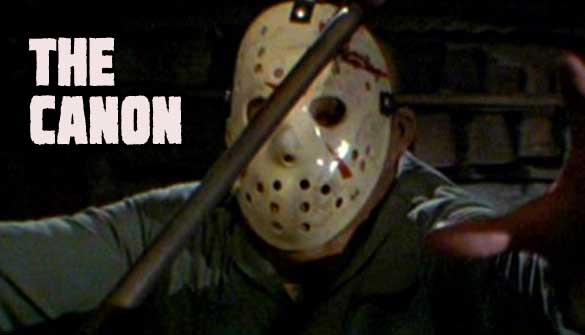 The 1-8 “Canon” comprises a linear serialized storyline that begins in a murder mystery style with Part One, in a summer camp at Crystal Lake, with councilors picked off one by one in a single night of horror, to the last surviving woman.  The killer is eventually revealed as Mrs. Voorhees, a deranged mom, whose son Jason may or may not have drowned in the lake years earlier, while councilors had sex and ignored him.  Though most of the killings are done by a faceless shape and though there is some question of whether or not Jason is a figment of Mrs. Vorhees imagination, Jason indeed appears after Mrs. Voorhes is killed in a famous surprise shock coda at the very end of the film, setting up a sequel.  The second film firmly establishes Jason as an iconic indestructible killer and then we track him through a series of ultraviolent teenybopper massacres in and around Camp Crystal Lake for seven more films, sometimes picking up just seconds off the previous story's ending. Jason is initially “driven” by a notion of rage and revenge to kill as many kids as he can to avenge his mother’s death, but past a certain point, he becomes more like the shark in JAWS—an indestructible killing machine who just does it, no matter what. In most of these films, the entire cast is killed, leaving a “Final Girl” survivor to deal with Jason in an extended cat-and-mouse game. Only one film in the series allowed a “Final Girl” character from a previous movie to return, and then only briefly.  After “killing off” Jason at the end of PART 4: THE FINAL CHAPTER, the series rejoins the “Final Girl’s” kid brother Tommy Jarvis many years later as an adult, grooming him to take the reins in PART 5: A NEW BEGINNING as “the new Jason.” In PART 6: JASON LIVES, Tommy does not kill in Jason’s place, but instead becomes responsible for “resurrecting” the killer in his grave.  This was the last film in the entire series history to feature an ongoing character. PART 7: THE NEW BLOOD attempted to introduce a new hero into the mix, a troubled teenage girl with Carrie-like psychic powers, but she never returned in a consecutive entry. PART 7 is regarded by most fans as the worst film in the “Canon,” often vying for position with PART 5, in which Jason is never featured at all. (The killings are all done by a copycat.) A serious examination of the timeline in these later films proves dizzyingly incongruous. Many articles and blogs by professional journalists and fans are devoted to making sense of the ages of certain characters, timelines regarding Jason, and plot notions from film to film that throw monkey wrenches into the ongoing mythos. It’s something of a mess, really, but fun for Nerds Like Us to argue about. The most expensive film made in this continuity, PART 8: JASON TAKES MANHATTAN, was budgeted at a whopping five million dollars. It was also one of the least successful (though it made three times its production budget at the box office), prompting Paramount to lose interest in picking any future films up. 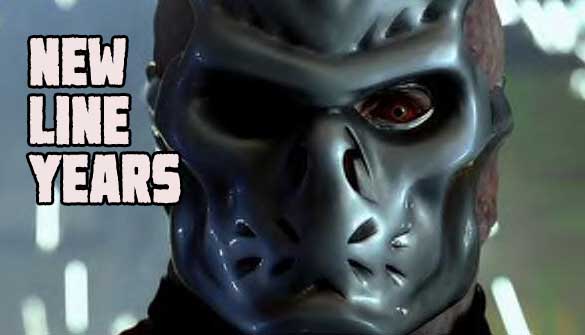 The distribution rights in the series were sold to New Line Cinema, who rebooted after a fashion, with JASON GOES TO HELL, JASON X and, finally, FREDDY VS. JASON, which was the first (and currently only) movie in history to cross-pollinate two legendarily popular post-modern slasher anti-heroes. (Jason’s foil being, obviously, Freddy Kruger of the NIGHTMARE ON ELM STREET series.) This trilogy of films are out-of-continuity “elseworlds” scenarios, as each story is self-contained unto itself, with entirely new characters, storylines and attendant “series gospel” parameters. JASON GOES TO HELL was particularly reviled by hardcore FRIDAY fans as an affront to all that had gone before, attempting a supernatural “reboot” explanation for Jason’s indestructability that borrowed from many other movies, and changed the very nature of the killer. JASON X was essentially Jason in Space, and was met with mixed reactions—but is mostly regarded as an intentionally campy exercise in post-modern “meta” horror. FREDDY VS. JASON is almost always dismissed by fans in terms of its ludicrous plot and characters. (Camp Crystal Lake is right down the block from Elm Street—who knew?) Still, the film is often praised for its technical sheen and stylish directorial approach. It was also, scene for scene, the most graphically violent and bloody of any film in either series thus far, a milestone at the time of its initial release in 2003.   The FRIDAY THE 13th remake of 2009 is also considered by fans an anathema—though, financially, it remains one of the top grossing Jason movies to date. Much of this can be attributed to clever marketing and curiosity, even among the hardcores. (I was first in line to see it myself.) 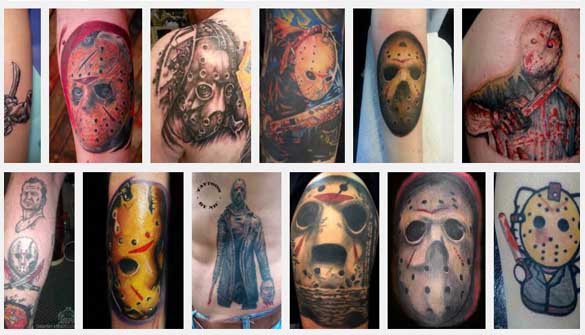 And speaking of fans. Ahem.  The followers of the Jason series are a die-hard bunch, and most of them take this stuff dead seriously.  At a typical Fangoria convention, you’ll find thousands of card-carrying Fridayphiles, many of them marked for life by the face of their master.  To wit, a random image search on Google (CLICK ABOVE) will return literally hundreds of Jason tattoos, a tiny cross-section of which is pictured above.  (This is not an uncommon socio-cultural phenomenon.  In fact, if you do the same image search on Godzilla tattoos, the volume of returns is at least as staggering, and even filmmakers such as Woody Allen have their share.)  Some fans are more analytical than others, but a fair number of Fridayphiles will acknowledge that the stigma and mystique of the Jason character is probably what survives the ages, rather than the relative artistic merits of any entry in the FRIDAY THE 13th series.  It’s almost akin to being a fan of heavy metal music.  The very art of darkness embodied in the Jason ideology brands its fire into your soul, and the ink into your skin.  Just the iconic hockey mask image has become synonymous with horror fandom in general and appears in many permutated and cross-pollinated forms, such as this one, which was my favorite of all the images I searched: 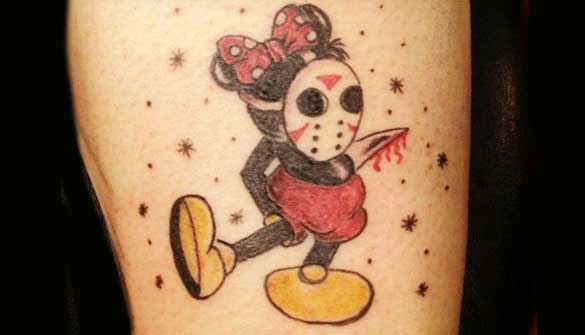 (These images, by the way, are presented for historical research purposes and are not intented as a violation of anyone’s privacy, and so I have withheld the identities of these tattoo owners.)

Additionally, these films can be quite fun and nostalgic for those of us who grew up with the entire cycle.  A few of them are even pretty good, being “best in class,” of course.  All of them owe their entire existence to John Carpenter’s seminal 1978 horror milestone HALLOWEEN, which not only cemented the Jason formula of stalk-n’-slash (which had been roughly established many years prior by Tobe Hooper in THE TEXAS CHAINSAW MASSACRE and Bob Clark in BLACK CHRISTMAS), but also set the box office gold standard for slasher horror that would be imitated for decades. Sean S. Cunningham, the producer/director/creator of the FRIDAY THE 13th film series, has gone on record many times as saying that he made the first one “out of desperation” and was trying quite consciously to “rip-off HALLOWEEN” in order to imitate its box office success.

It is worth mentioning once again that Jason wasn’t even the killer in the original FRIDAY THE 13th film. Jason’s mother was the responsible party in that one, with her son only living on inside her head.  (MAYBE.)  When Paramount insisted Jason be brought in as a physical presence for PART 2, Cunningham bowed out of the seven remaining films in the ”Canon,” ironically only returning in the New Line Era. Once, when accosted at a horror convention by a bold fan, who accused Cunningham of “ruining the series with JASON GOES TO HELL,” and presented him with a 20 page manifesto entitled “Jason Goes To Shit,” the producer cheerfully signed the fan’s DVD copy of the film: 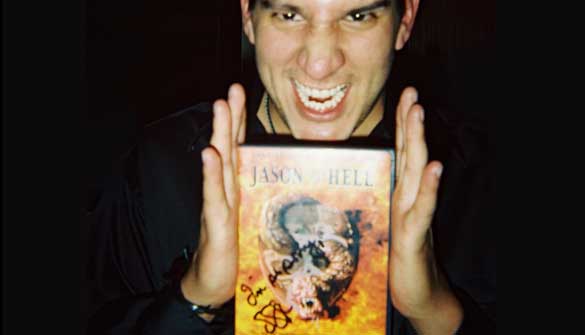 (I witnessed that last story with my own eyes, by the way, and took this picture with my own camera.  The guy’s name is Kevin.)