And now, a history lesson about a few things most people don’t give Fuck One about. 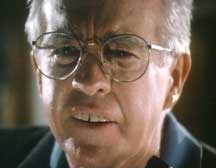 See this fella? His name is JOHN “BUD” CARDOS, and in a dream I never want to wake up from, he is one of The Greatest Film Directors Of All Time. 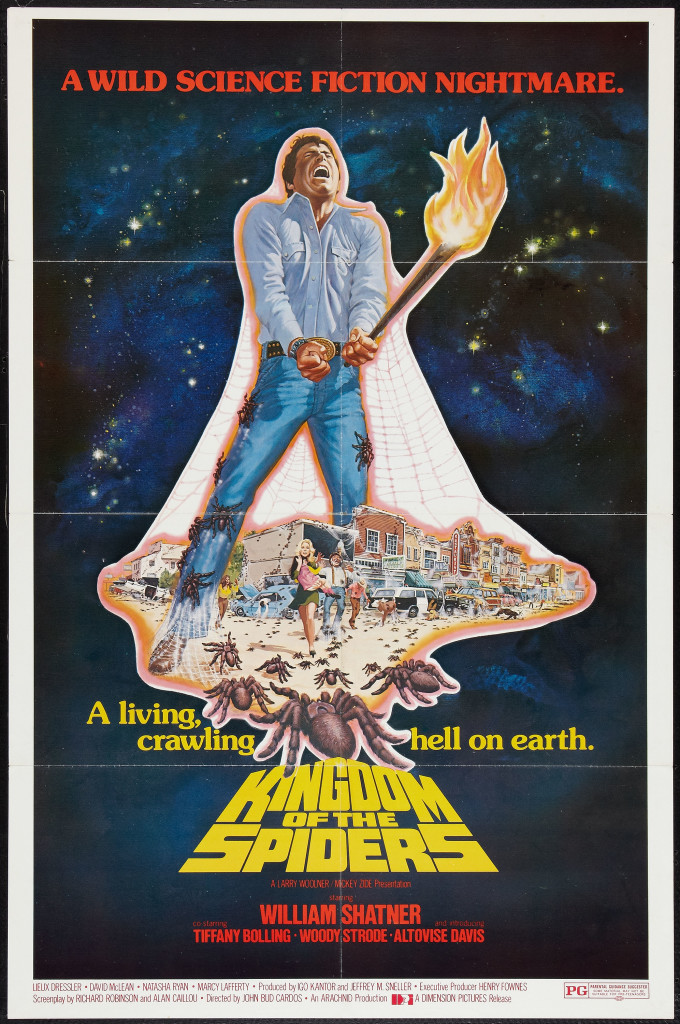 1977, KINGDOM OF THE SPIDERS.   About halfway through this fine, fine film, Captain Kirk opens a toolshed to discover a friend of his being eaten by tarantulas.  And then guess what?  He shuts the door.  The film then becomes a chilling study in exactly What You Would Do if spiders took over the world.  There’s a lot of screaming and door shutting.  And some people try to run for their lives and a car blows up or something.  John “Bud” Cardos was a stuntman and an actor in varied exploitation movies before a series of opportunities placed him in the director’s chair.  This was his third film as helmer and I’m pretty sure he’s never lived it down, even though it was a big success when released in drive-ins, the same summer STAR WARS came out.  (I even have the paperback novelization of the film—actually bought at a drugstore in 1977 because of the swell cover.)   Only problem is, bugs don’t really scare me, unless they are actually crawling up my ass and/or eating my brain.  In movies, they just look silly.  And fuzzy tarantulas are downright adorable.  In fact, the bits with all those cuties attacking very freaked out people in very small and easily avoidable numbers tend to remind me of those scenes in the NAKED GUN series where a bad guy gets away by throwing a towel at Leslie Nielsen, who then reacts like he’s been maced.  These people need to calm down and follow Shatner’s lead:  JUST SHUT THE FUCKING DOOR. 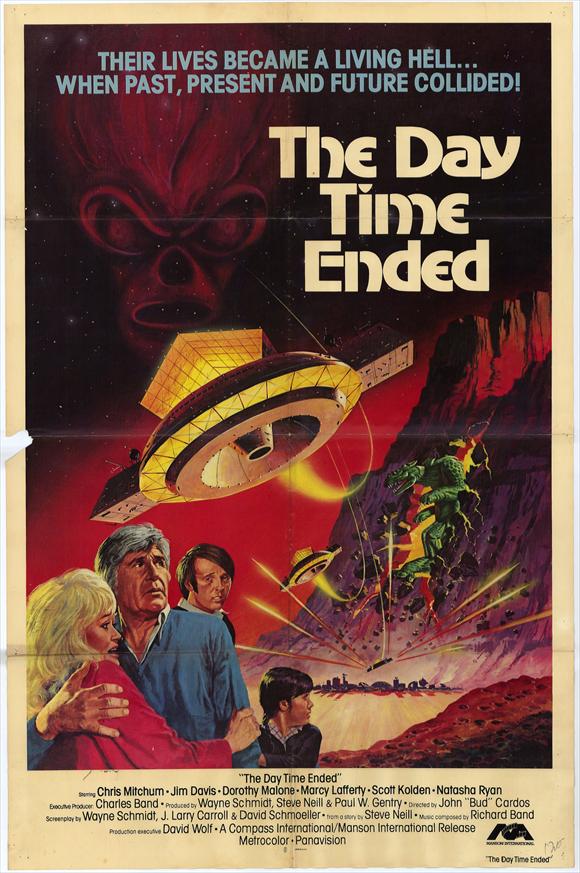 1979, THE DAY TIME ENDED.  In this film, a family who live in a solar-powered pyramid house in the middle of the desert (because who DOESN’T want to live in a solar powered pyramid house in the middle of the desert?) are invaded by aliens, monsters, gremlins, robot laser-drone things . . . and are eventually sucked into a time space warp and end up in the Emerald City of Oz.  They should have just shut the door, right?  This was a film produced by the notorious B-movie mogul Charles Band at the end of the 1970s, which went millions of dollars over budget.  This sort of reckless spending on special effects and other trimmings, such as Richard Band’s elaborate orchestral score, would become Charlie’s hallmark throughout the 80s and 90s, leading to rapidly-escalating forms of financial ruin and the eventual destruction of his much-beloved B-movie distribution factory Empire Pictures.  Bud is the hapless director who drew the short straw, caught in the crossfire of a super ambitious scenario so top heavy with weird ideas and elaborate sequences that it took nearly two years to complete the movie.  The result has to be seen to be believed.  And I’ve seen it more than a hundred times, people.  No joke.  It’s just that awesome. 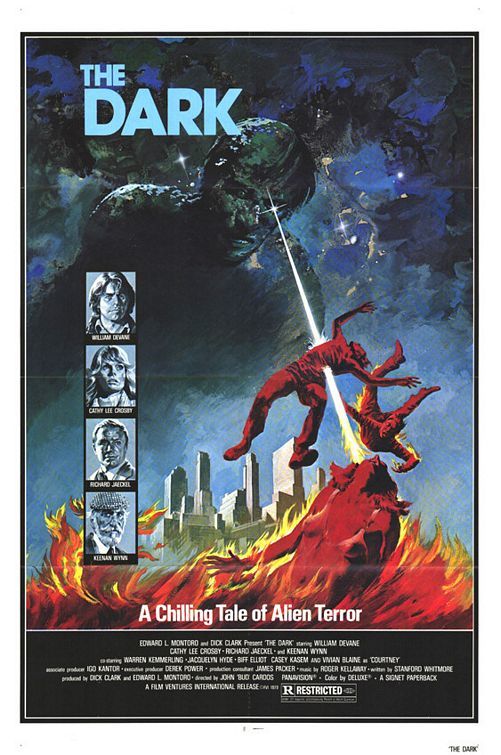 1979, THE DARK.  William Devane, slumming hard after MARATHON MAN, plays an unlikeable jerk who sort of almost figures out what’s going on in the movie.  And what’s going on is really very simple:  a meteorite has crashed landed in New York or somewhere, releasing some sort of something that inhabits the body of a random dead guy, turning him into a zombie-monster-killer-creature who vaporizes innocent people with rays of light that shoot out of his eyes, while a saggy old bitch is given psychic visions of each murder, appears in Cathy Lee Crosby’s dreams and eventually gets a supernatural lobotomy when her apartment explodes.  This, obviously, is why the film is called THE DARK.  Actually, it’s what happens when the world-famous director of THE TEXAS CHAINSAW MASSACRE  (Tobe Hooper) bails from a sinking ship at the last minute and the creator of American Bandstand (Dick Clark) suddenly decides his gothic horror film is really a sci-fi creature feature.  And then they get the Spider guy to come in and save the picture.  The effect is surreal and the score is amazing, mainly consisting of a lot of people whispering wordless chants in low tones.  You can’t figure out what movie you’re watching much of the time.  It’s like a bizarre dream someone else is having.  I watch this film almost every day.  It makes me feel normal. 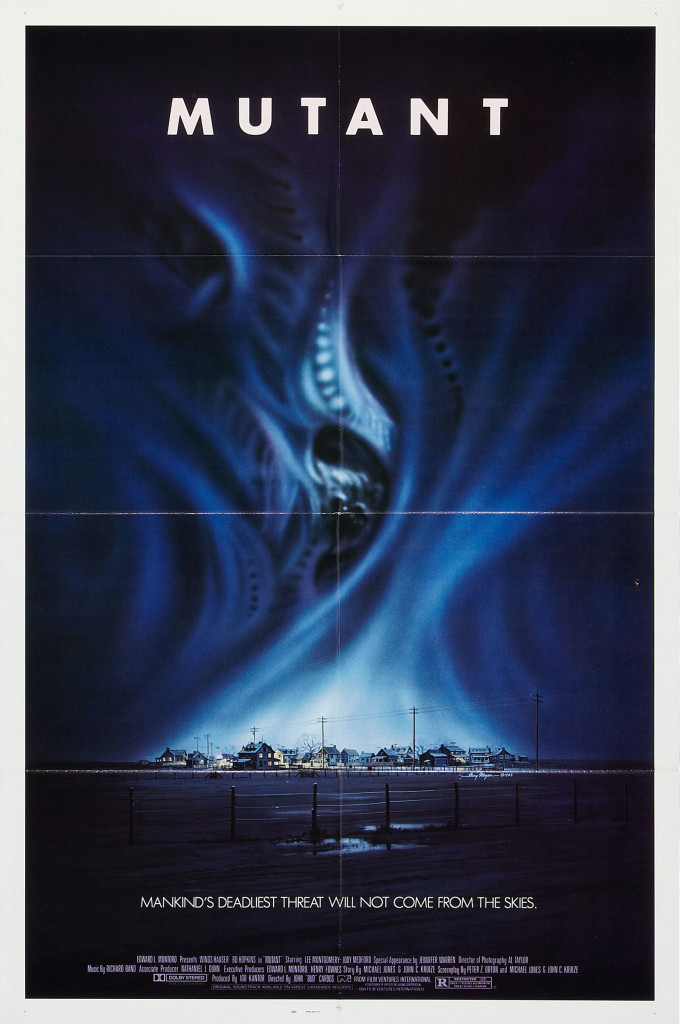 1984, MUTANT, also known as NIGHT SHADOWS.  Not my favorite of the bunch, but the poster contains all that weird airbrushed Gieger-esque gobbledygook.  Such gook has nothing whatsoever to do with the film it advertises, which is baffling for a roomful of reasons, so I’ll just pick one:  See, usually, when a poster from the 70s or 80s told us lies, they at least gave us a cool monster, or Bill Shatner screaming or something.  This just makes no sense at all.  Awesome.  But what do you want from a movie where the main dude is played by a guy named Wings?  Oh, and this is a zombie movie where the zombies bleed yellow from the palms of their hands when you shoot them.  Double Awesome.  The music is by Richard Band again, and I own it on vinyl.  There’s a swell picture of Richard conducting The Royal Philharmonic Orchestra on the back cover.  Most of the violinists look bored.  This is one of those movies where the entire plot is motivated by someone’s car breaking down in a backwoods hillbilly town, where something really, really scary is happening.  And Wings has a brother who actually gets pulled under his bed by one of the zombies early on.   At that point you have no idea what the mutants actually are, so it’s almost creepy.  Then you realize you’re watching a movie that never could have been made today.  For a roomful of reasons. 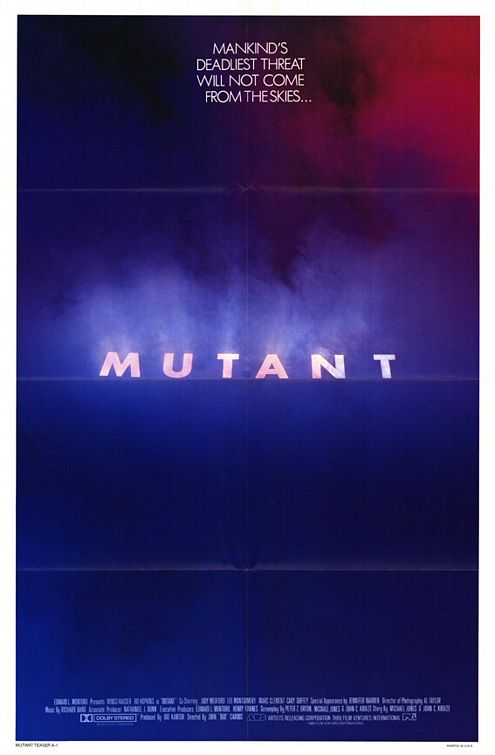 (Teaser poster.  When lies that make no sense just aren’t enough . . . show NOTHING.)

So are you convinced by now that John “Bud” Cardos is one of the The Greatest Film Directors Of All Time?

Am I lying to you?

And does it matter?

The answer is that we are living in a dream, baby.

In the real world as it currently exists, there are at least a hundred directors like John “Bud” Cardos working, but there will never EVER be a director like John “Bud” Cardos again in the history of cinema.  I mean, sure, you have lots of trashy monster movies these days.  There are plenty of guys who crank out “higher-end” Sy-Fy channel films like SHARKNADO, and/or low-end Netflix fodder like ALIEN VS. HUNTER.  These fellas are usually efficient purveyors of relatively competent cinematic craft who put exactly zero real artistic stamp on anything they do and are only “famous” within a certain circle of film professionals and/or fans of Really Bad Movies.  There’s nothing wrong with that.  Its been this way forever, since the start of the medium.  Everyone has to make a living.

That’s not a rhetorical question. I’m really asking you that.

Good for you if they do. They kinda make me happy too.  But . . . well, I also have a perspective on these things that makes me more than a little nostalgic for “the good old days.”  In the 37 years since KINGDOM OF THE SPIDERS was made, the VHS video age has come and gone, the digital age has come and almost gone, and everything has imploded into a bizarre absentee-humanity era, as people make that fast grab for instant gratification on their cells and PCs.   So when you watch a lost gem like THE DARK or MUTANT—a vintage “genre” piece actually shot on FILM, with all those dated effects and a real orchestral score—something happens to you.  The years roll back.  It’s better than a timewarp, safer than an acid flashback, and cheaper than my dick.  Polarized ideals wash up on the shores.  Bizarre contradictions in style and story collide head on like bullet trains hitting each other in slow motion.  It all becomes so surreal (and even alien) that you must throw up your hands and concede resignation to a very strange and paradoxical OTHER UNIVERSE.  One in which the tarnished ideals of a long-gone age in shameless cinematic exploitation had to be earned through a system far more top-heavy and not nearly as auto-mechanized as today’s state-of-the-art, in which everything is either cobbled together on a laptop, or run through the multi-billion dollar Hollywood franchise machine.

The 70s and 80s was the last gasp of an age in which movies were physically made, not digitally simulated.  Crafting a clunky classic about monsters on a low budget was not only an exciting and ambitious proposition in those days—it was also damn-near impossible.  The people who tackled it and made the grade—whether it was A, B, C or Z—must surely be a race of long-suffering gods, who worked a very special kind of magic.  Today, we experience the quaint and dazzling artifacts they left behind in an incredulous sort of sleepwalk, seeing a world almost half a century younger and more naive, and an industry poised to be evolved into something far less special.  Today, we can see so much of what was lost.

Today, we can say that John “Bud” Cardos is one of the The Greatest Film Directors Of All Time.

You can say that with a straight face if you want to, but it’s okay to laugh, too.

After all, this is only a dream. 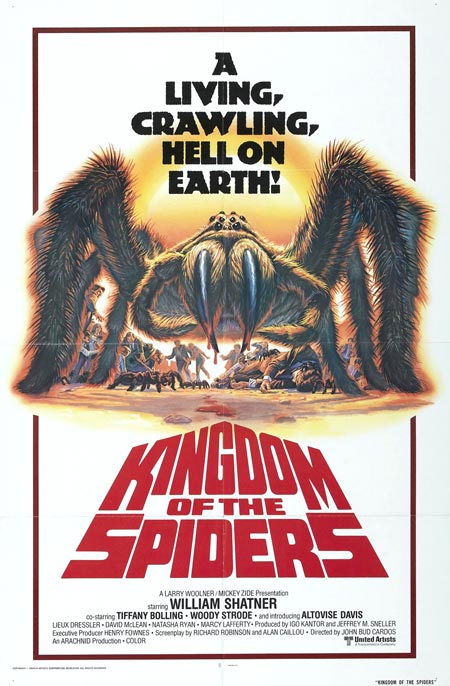