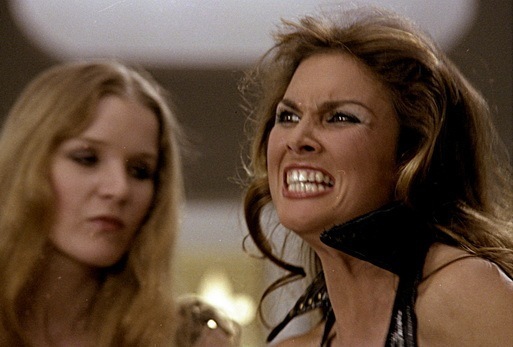 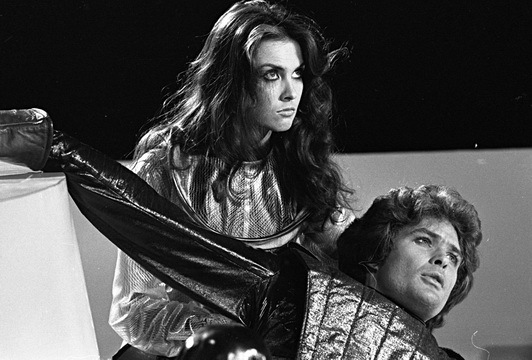 For those less interested in the life and times of professional bad guy Joe Spinell, which is what out last chapter was chiefly concerned with, here are some additional randomly selected pics from the set of the cult sci-fi awesome-fest STARCRASH, available here for the first time ever, with a few amusing captions.  That’s Carloine Munro and David Hasslehoff up there, learning how to dance or something. 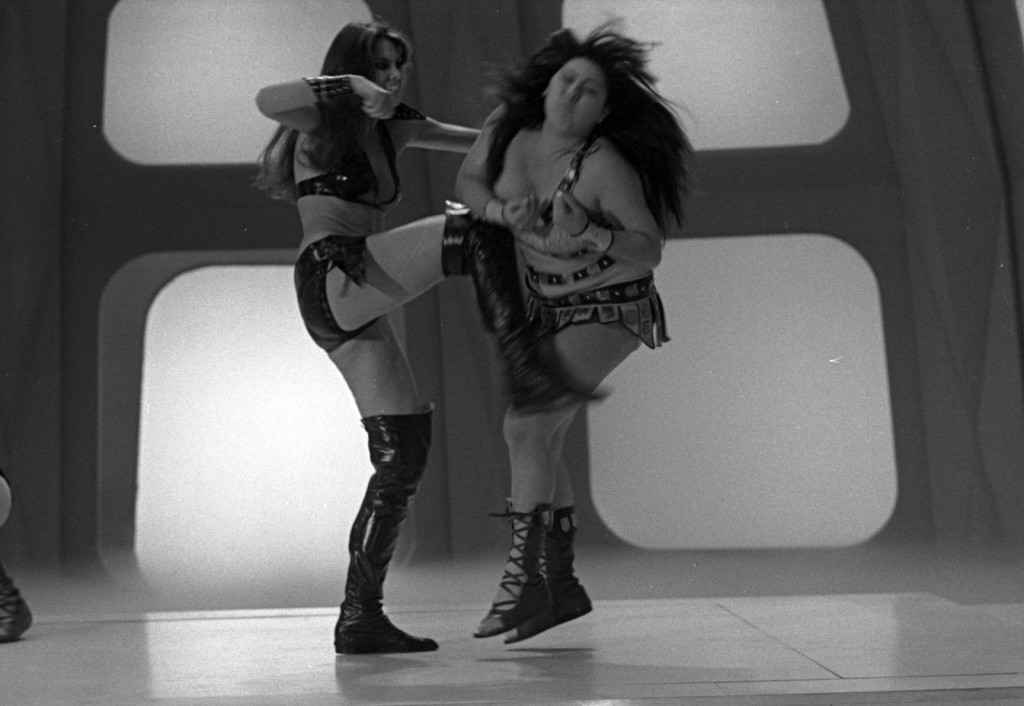 SPACE-FU:  You haven’t known the meaning of the word awesome until you’ve had the crap kicked out of you by Stella Star.  Look hard and you can see that the stuntwoman’s feet are fully several inches off the ground.  (There may also be an allegory here about the beautiful people.  You make the call.) 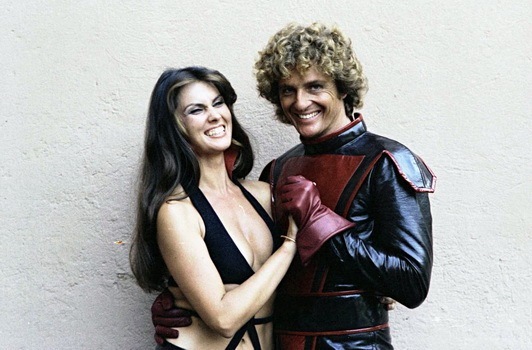 Marjoe Gortner and Caroline Munro go to a costume party.  Marjoe was a child evangelist in the 1940s who became a hippie preacher in the 1970s, bringing a camera crew along with him on his final tour of the evangelical bible belt, exposing organized religion in a public medium for the first time.  The film made from that tour won an Academy Award for Best Documentary and Marjoe parlayed his sudden weird fame into a string of starring roles in stellar entertainments like this.  He also appeared on Circus of the Stars a few times.  (That was “reality TV” in the 70s and 80s.) 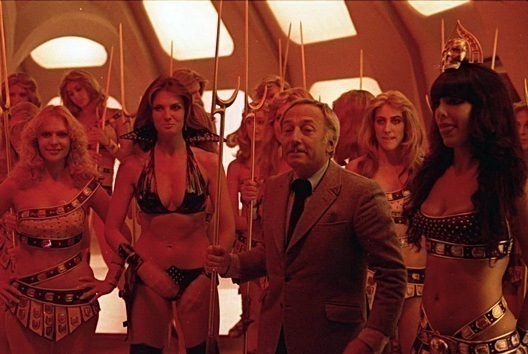 Steve Previn of American International Pictures vists the set for a quality control inspection during the shooting of a sequence that was later scrapped because of all the stark red light.  To the right, Nadia Cassini as the Queen Amazon acts very professional. STARCRASH was originally an AIP project, but was usurped by Roger Corman when completed and released by New World Pictures. To this day, Roger owns the rights.  I produced the Blu-ray release for him in 2010. 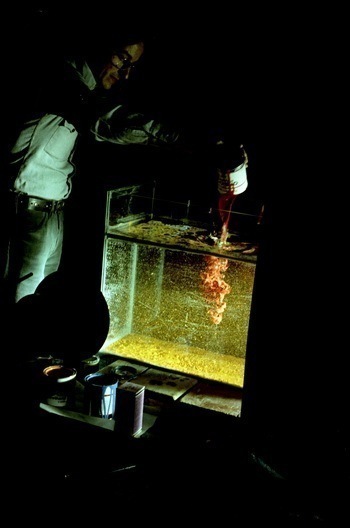 This, believe it or don’t, was how special effects director Armando Valcauda created the outer space monsters in the film.  That’s red paint being poured in a fish tank, dudes.  The footage was then superimposed over shots of the actors and they all act like they’re getting headaches and going crazy.  The exact image being produced in this photo can actually be seen in the final film, and you don’t have to look hard for it either.  (If anyone is interested, those nebulous glob monsters were actually quite SCARY to me, when I first saw the film at age 9.  I was literally this film’s target audience back then.  Guess what?  I still am.)

Blinded by spece-teeth!  This was from the later re-shoot of the “red room” sequence. 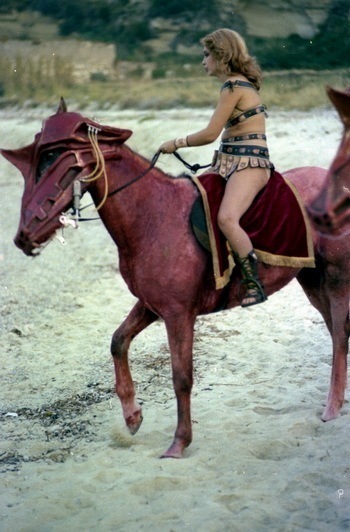 These horses were all given elaborate futuristic masks and were painted RED from head to hoof, for a series of shots that last a little over 20 seconds in the finished film. 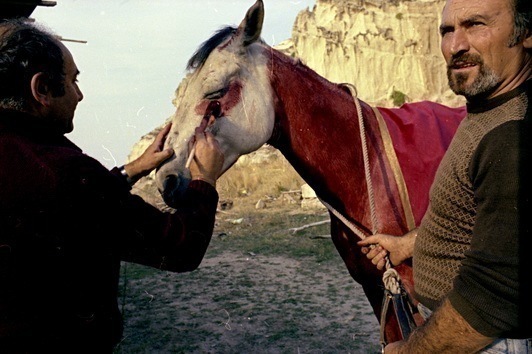 A lot of people think STARCRASH was a super low rent affair.  Not true at all.  While the picture WAS lower budgeted than most STAR WARS imitators, they did a have a great deal of resources at their disposal during production.  The crew was rather large for example, and they shot on many expensive locations, like this one, which was chosen because it was near a beach where JASON AND THE ARGONAUTS was filmed.  They also shot at Cinecctta, one of the most prestigious movie backlots in the world, where BEN HUR was made. 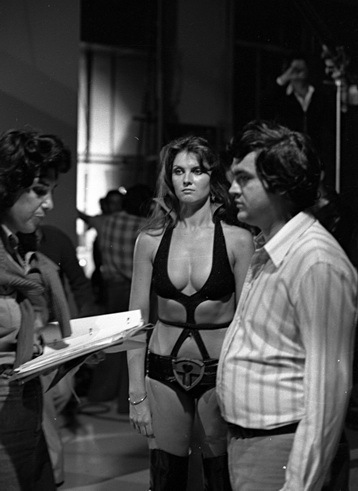 This was a typical day at Cinecetta.  Lots of standing around and making unhappy faces.  The crew went on strike regularly due to not getting paid.  That’s director Luigi Cozzi standing to the right.  He gave me all these pictures because he’s pretty much the nicest guy in the universe. 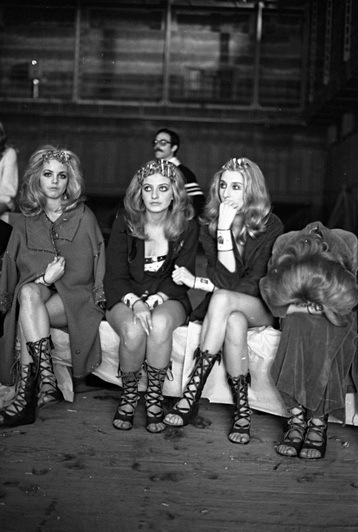 A bunch of hot Amazon ladies wait around to be filmed . . . 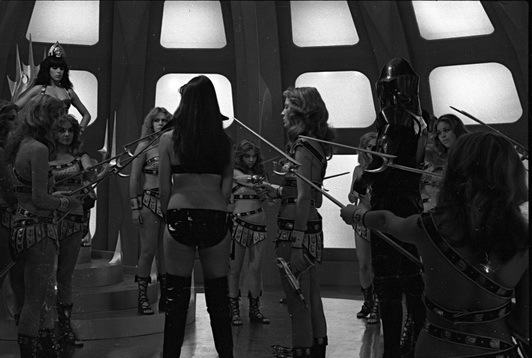 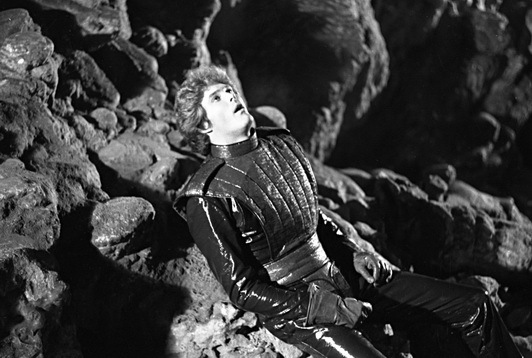 This is the sort of behind-the-cenes photo David Hasslehoff probably wishes he could seal in a rocket ship and blast directly into the center of the sun.  David was suffering from terrible food poisoning the day these scenes were shot and eventually had to be rushed to the hospital.  Caroline Munro followed suit shortly after.  They both had bad seafood at the same restaurant. 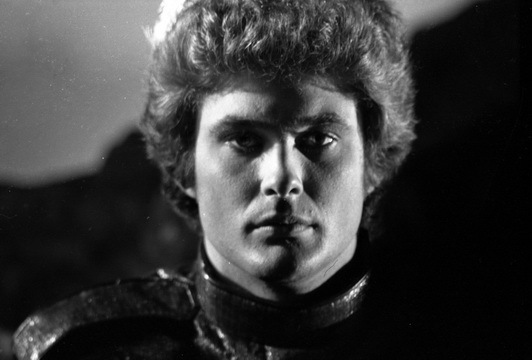 In this photo he’s toughing it out for the camera.  Makes him look more dapper and mysterious.  Thirty years younger, too. 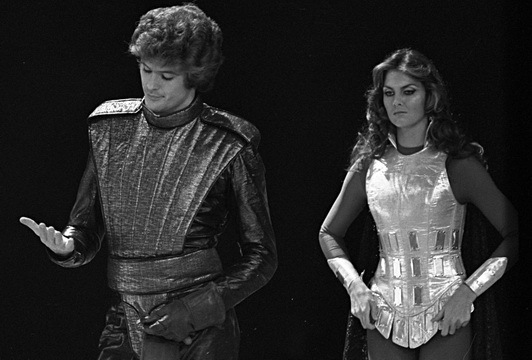 Also, when you are young, you are a lot more fascinated with your right hand for some reason.  Search me. 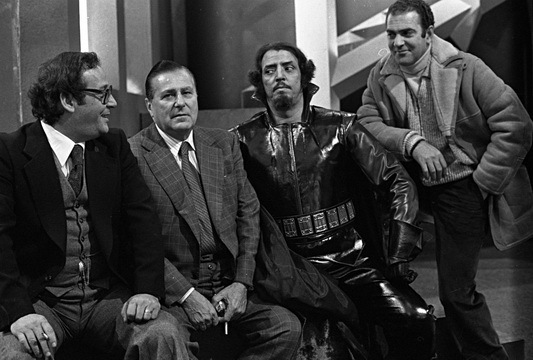 Joe Spinell, professional tough guy and not a man you ever wanted angry with you, once went after the producers with a knife to get his meal per diem for the week.  This looks like it might’ve been that day. 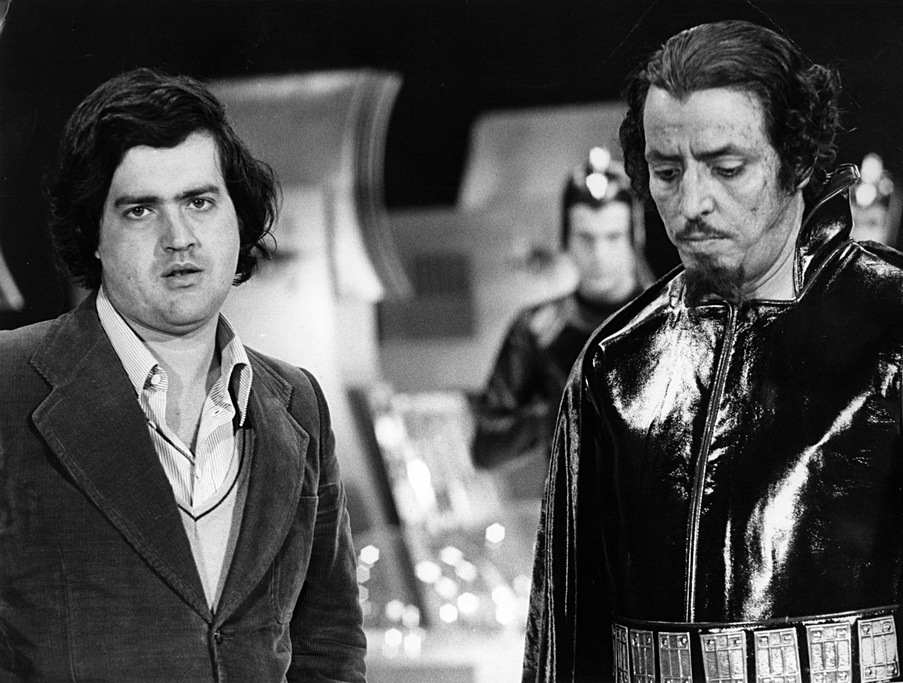 On this day, Joe Spinell had to give the money back in order to pay for the film that was used to shoot his big scene.  Director Luigi Cozzi (the one not wearing a costume) looks pretty happy about that, doesn’t he? 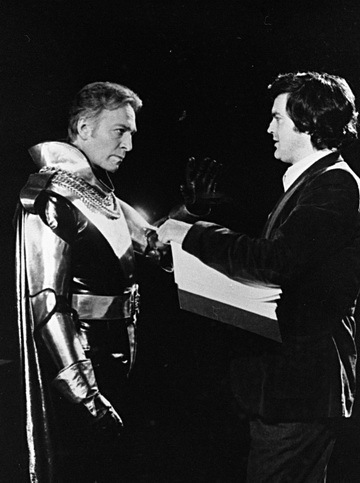 And, yes . . . Oscar-winning movie star Christopher Plummer plays The Emperor Of The Universe.  He was paid 30 thousand dollars a day for three days of work.  And that was 30 years before he won the Oscar, too.  Classy, huh?

and HERE for CHAPTER 1: STELLA SMILE