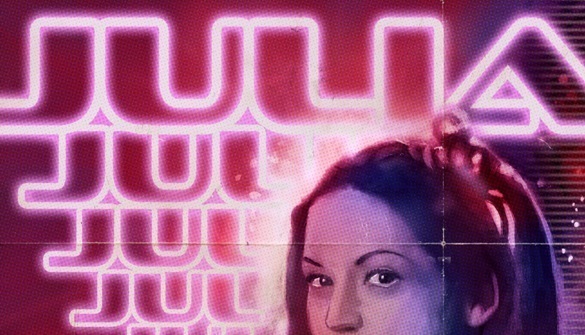 Julia Starchild’s final film is a bittersweet affair. Click her name above to read all about it.

I haven’t been writing much supplemental material about Julia the last few weeks. Mostly that’s because just writing her story has been emotionally challenging and logistically difficult. (I have about a billion things on my plate these days and I even need a dry-erase board to plot my course through the storm.) The story should probably speak for itself anyway, I suppose. But since this week we’re coming to the end of (there’s a final “epilouge” chapter next week), I thought I might take a minute to address my process in the creation of this series, and where it sits in relation to my other work. All three of you who care about such things should find my ramblings fairly amusing. The rest of you, so watch Netflix or something. Chances are, my words here will not make you an instant fan.

Julia Starchild represents a bumper crop of mostly unpublished short fiction I’ve been working on for the past ten years or so. Some of this stuff has been collected in an upcoming volume, which I’m calling (for the moment) HOW BAD DO YOU WANT IT? Julia is the most recent of these short stories and the only one I’ve allowed the public to see. Before that, a little earlier this year, I completed another epic tale of similar novella length, entitled Rose .45. I started it in 2012. I had to almost die before I could finish the goddamn thing.

All my short fiction tends to be that way. It’s comes when it wants to. It’s darker and more uncompromising than my novel-length stuff usually is. And it’s probably the purest expression I make as a writer. I find that the empty page speaks to me the way a blank canvas does when there are no pre-imposed rules about style or content or even good taste. In fact, fuck good taste. Since when did anyone who gave a shit about good taste ever produce great art, man? And so, with my mind free to wander and my poison pen set to stab hard, I create stuff which upsets people and polarizes readers. Here, I deal in pure theme, deep hurting, the hardest truth a red-blooded American boy can tell. It’s not always angry and red, but often it is. That’s just where my mind tends to go. It would be easy to say it means nothing. But it does, I’m not going to lie to you. It’s a bad world out there and bad things happen in it. People hide their true faces. People do terrible things to each other. Crimes so awful they can hardly be imagined go unpunished. I deal with all this by writing it down.

And in many cases, as in the case of Julia Starchild, I am telling you about me.

This is also where the best art comes from.

There’s even a lot of me in those novels.

It’s not all me. Sometimes a story’s just a story, man. But still and all, my upcoming collection features all sorts of dark confessional stuff. The wild tale of Trenchcoat Trailerpark Massacre, for example, tells of further dark adventures in filmmaking. Rose .45 details the madness of being half a man, crippled for life and scarred in the heart. Total Ultimate Stephanie and Just Like Jill continue my lifelong love obsession with the world’s most evil women. Oh, and just wait’ll you get a load of Nick Maelstrom, guys. He’s my new private eye character. He lives in a world that doesn’t exist. We’ll have some fun there.

Meanwhile, I hope Julia has given you some insights.

Her story is the story of us all, I think.

And in case you are wondering, this week’s pin-up of Julia was inspired by one of my favorite postmodern nudie-glamour girls: The awesome miss Bianca Beauchamp. Check her out sometime as Harley Quinn. She’s a nerd and she rocks.

Oh, and I have one more embarrassing little aside that may also slightly amuse you.

So, like a lot of self-taught writers, I learned to type on my own. Which means I don’t really do it the right way. I call my style of hunt-and-peck “Mystery Novel Typing.” Meaning that I look just like one of those Mickey Spillane types, using two fingers in a fast motion blur. Its kind of an amusing sight. I do it harder and faster than a lot of writers, but I do it really weirdly. (Ask William Gibson about that sometime. Go on. I double dog dare you.) In addition to this fun little “handicap,” I’m also mildly dyslexic, which produces some funny moments in my writing life, most of which are usually corrected by Skynet. (Read: Spelling Autocorrect.) In the real world, however, there is no computer-that-rules-everything to help me out of fun little jams, like when I say words in reverse, or speak the opposite of what I am trying to convey . . . but as I may have mentioned before, it’s always a fun adventure, just being me. What this mean is that certain words often prove difficult to spell correctly, even on a good day. For example, I never once in my life have spelled the word “THE” correctly. I always botch it up as “TEH.” (Both times I spelled it just then, the Terminators had to correct it for me.) This is never really a problem, most of the time. Except in the case of Julia Starchild.

Her first name is a bitch for me to get right. Through a combination of the wonky brain and my weird typing skills, I always reverse the “i” and the “l” in her name, so that it looks like “Juila.” Because the two characters look so much alike when they’re that close together (at least to my destroyed brain), I also never really notice unless it’s pointed out to me. And the Terminators NEVER point it out to me, because they like making me look stupid in public. For example, over at Twitter. When I’m making hashtags for Julia’s name, I screw them up about 50 percent of the time. Which not only makes me The World’s Dumbest Man, but The World’s Worst Social Media Guy. Then again, I think it’s a more than a little bizarre that stuff like Twitter and Facebook are things you now require degrees to master and exploit “properly” as a professional . . . so whatever. There’s my confession and that’s my dark secret. I can’t spell “Julia” to save my miserable soul.

Peace in the galaxy.