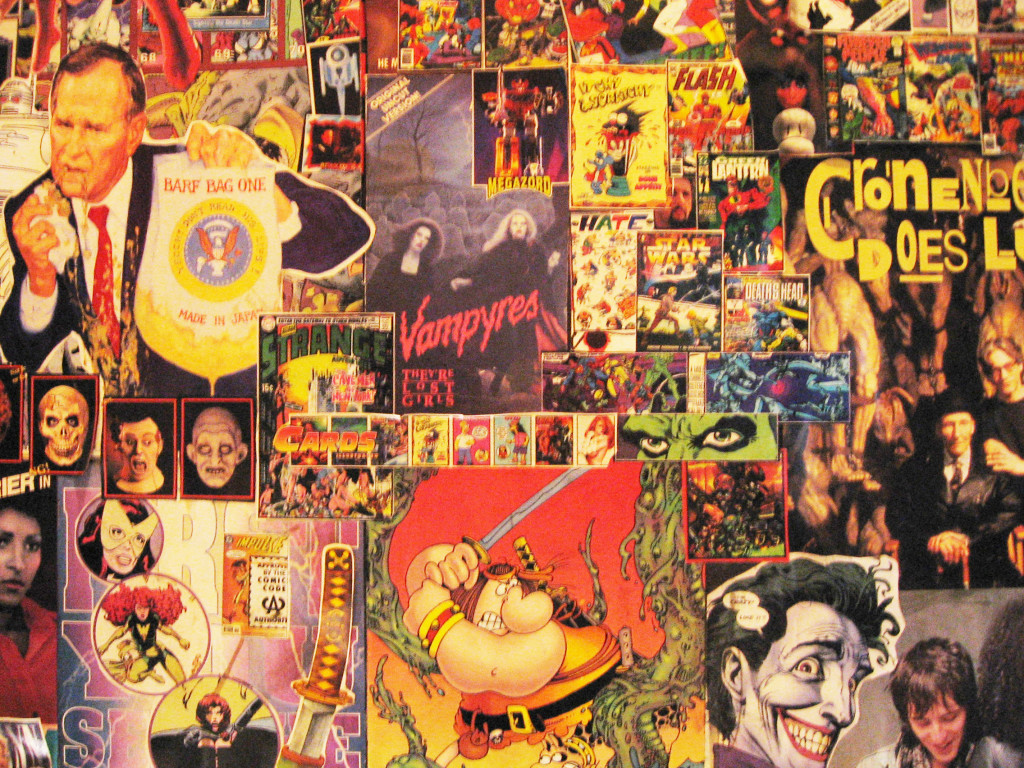 It’s hard to say what makes us stay.

When I was a much younger man, still in my late teens and early 20s, I was a gypsy soul. Restless. When I first moved to Austin, I did not stay in one place for long. I lived in a one room efficiency apartment that cost less than 300 dollars to rent and paid that rent as a dishwasher in a local hippie-dippy pancake restaurant. That was in 1988. By the year 1993, I had changed residences no less than 12 times. During those years, I lived in sleazy motor courts, fleabag motels, shacked up with a rock band, crash-landed on couches, floors, street corners, bathrooms, recording studios, and I was even homeless for a short while, squatting in a basement shithole with a childhood friend who was a junkie and an armed robber.

That I made it out of that dark time without ending up in jail, dead or worse was a bit of a miracle.

I credit some of this to my own resilience as a human being and my drive to become an artist (and not an armed robber), but who knows what really makes any of us stay in the end? That is to say, who knows what makes some of us stop being gypsies, allowing our restless souls to find a place that is truly home? I found that place in October of 1993. 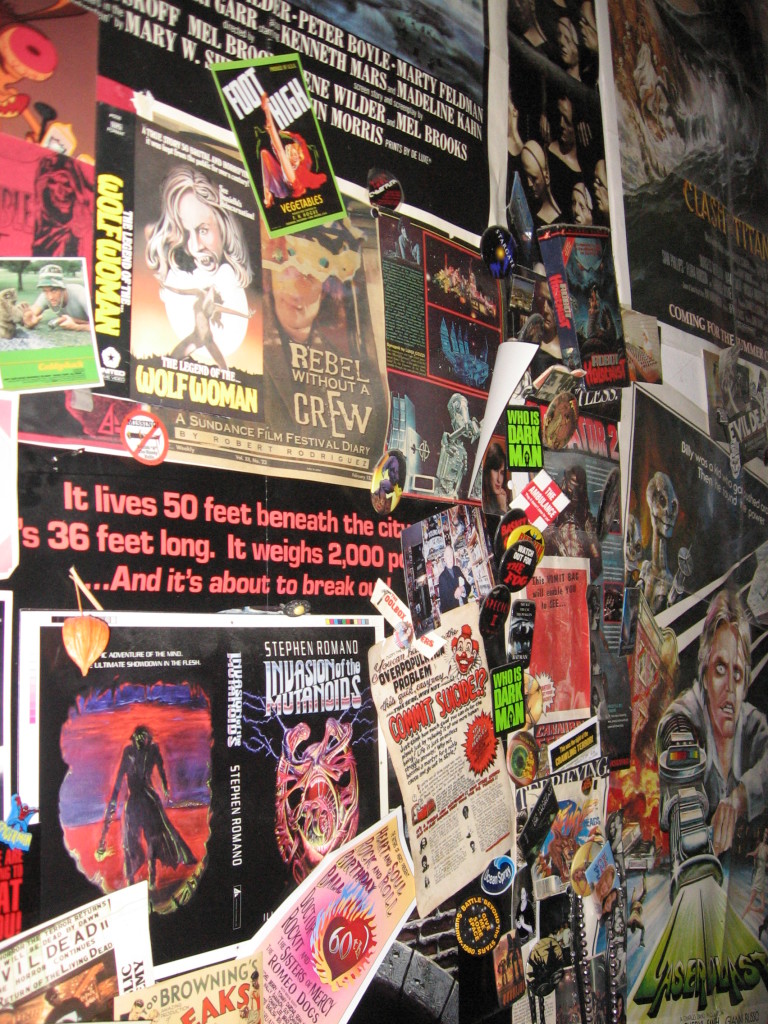 It was a small three-bedroom house on Montclaire Street. A place with high ceilings and almost no windows. I shared it for 6 years with two other guys, who had invited me to come live with them. Their names were Scott and Bryan.

When they left, I became master and commander.

And the house became a legendary last-stop known as The Kingdom.

When I left, I was a man, not a boy. I was a published writer, a produced filmmaker—I’d earned and spent many fortunes in a number of entertainment industries, sold my body to science, paid the rent in various nefarious ways, won and lost in the game of love many times. In one particularly freakish episode, I’d woken up the morning after an epic two-night drunk and found myself engaged to a darkly beautiful one-armed stripper named Sunshine. No, seriously. That really happened. And it’s not even the weirdest thing that went down in my room. 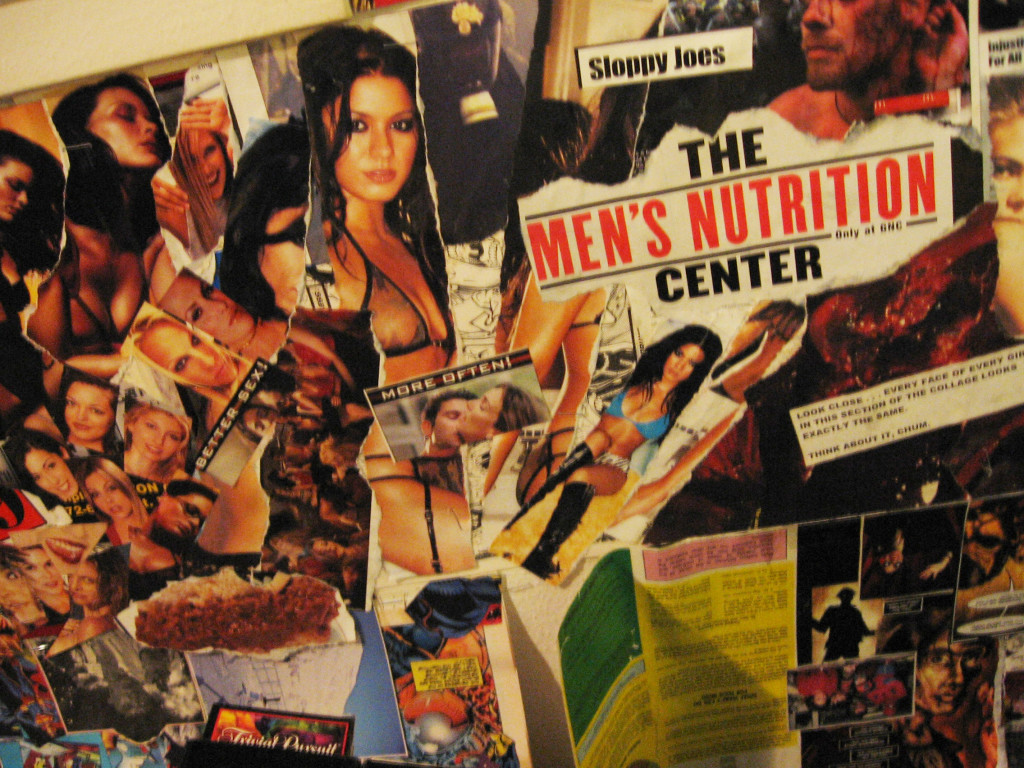 It is now 9 years since I left The Kingdom.

I have since immortalized the place in my book SHOCK FESTIVAL, and have more recently immortalized it again, in my upcoming novel METRO, which uses The Kingdom as the setting for a series of very dark, very tall tales. It’s a novel that asks the question—are your friends what they really seem to be? This is probably an oh-so-clever metaphor for many real things in our actual day-to-day lives. The faces we wear in dark corners that we never show anyone. The secrets we keep, even from our best, most cherished amigos. In the world of METRO, the answers to these questions are violent and horrifying and have lasting impact on the world at large. In the world I lived in for those 13 years, it was no less horrifying at times, but a lot less violent. I met many people there. Fast women, young bucks, hard chargers and wild partiers. Our gatherings were filled with weirdos and wildos, drugs and booze, music and madness.

Oh, and we really loved movies.

And comic books, too. 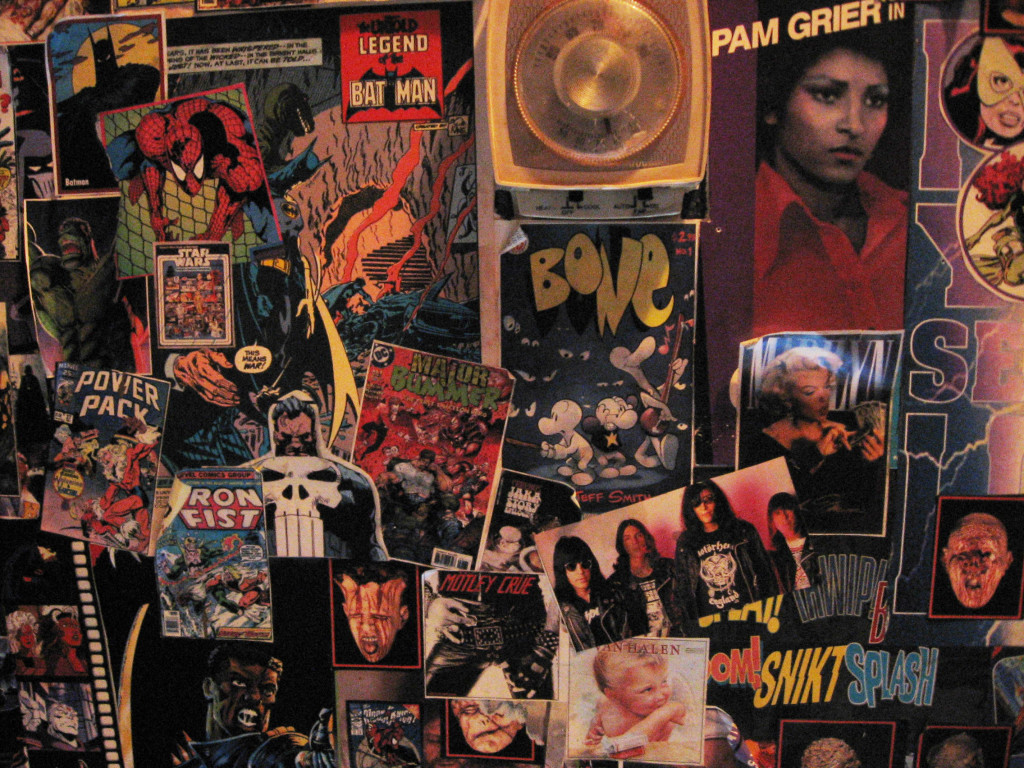 Walking in through the front door, you see that every surface in the place—even the ceilings and the furniture—are covered in an endless free-form mural of magazine clippings, collage art, old buttons, scraps of paper with dirty limericks written on them, pages from comic books filled with glorious gore and two-fisted heroes, poems pasted and stapled together from the works of Hunter S. Thompson and Charles Bukowski, painted faces and scribbled emotions, all train-wrecked together in an explosion of scrapbook photos that trace all the people who ever lived here and the magic they brought with them, labels from booze bottles, Mardi Gras beads and film festival badges, plastic Hawaiian flower leis and rubber snakes and strings of glittering Christmas-tree lights, purple velvet pouches with lacy yellow trim that used to be filled with bottles of Crown Royal, a button that says damn i’m good and a sign that says no foul language in this room please, crayon art scrawled by lazy, crazy people in the midnight hour, cartoons scissored from the Sunday papers and pasted in layers to make a new joke, an ad for Skyy Vodka that shows Ben Stiller as Zoolander making a martini, James Bond looking cool with his Walther 9 mm, drawing down through a gun barrel oozing with blood, video covers and love letters and cashed check stubs kept as souvenirs . . . and movie posters. Lots and lots of movie posters.

It’s a superhighway of information and history.

Pam Grier and Luke Skywalker and Tyler Durden are your hosts.

The above-description is, of course, an exerpt from my novel METRO. You may have also put together that the images I’ve been sharing with you in this blog are also visual excerpts from the real place which inspired that book.  Those are the walls that surrounded me for 13 years.  And for the next 13 weeks, as we count down the days leading up to METRO’s exclusive release as a Simon and Schuster Ebook, please join me here for a look back at the place, in both words and pictures. The real place. The legendary place. Where friendships were steeled, laws broken, drinks quaffed and paths forged in the canyons of youth and craziness. I’ve got quite a number of swell real-life tales for you, along with hundreds of photographs from Ground Zero, which you can get a partial glimpse of RIGHT NOW by clicking on any of the images you see here. That CLICK will take you to the official, super-awesome Instagram page of the Kingdom, which I will continue to update each week.  (Keep an eye on Twitter, too.  Lots will be posted there.)  Believe me, folks—if you like weird stuff, this is the house you want to come live in for a while. You’ll find everything from a rare poster of an actual movie called INSEMENOID to an image of The Six Million Dollar Man jerking off a dead baboon. Or not. 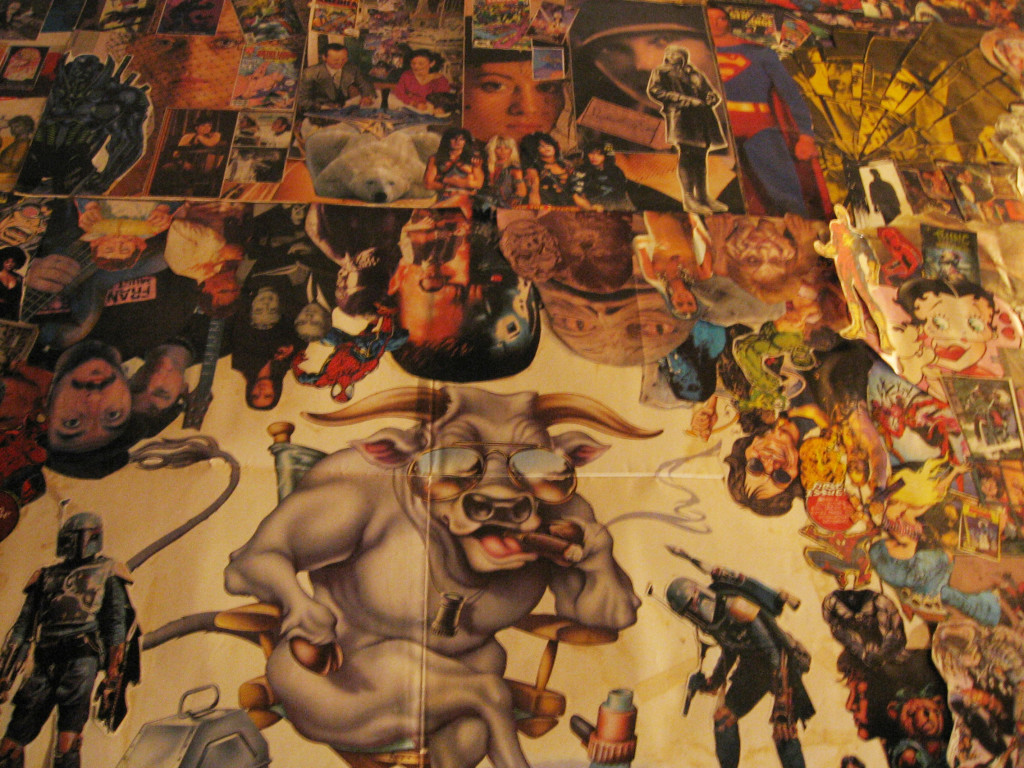 Anyway, you don’t just have to take MY word for it.

I’ve also invited a select few of my friends from this period, who’s lives were deeply affected by The Kingdom, to write about their experiences there.

They will tell you in THEIR WORDS what the place meant to them.

Those are my best friends talking.

Next monday, we shall begin, with founding Kingdom member Bryan Geer’s drop-dead hilarious essay from the very early years, entitled THE BURNING OF THE LOG. Until then, keep the home fires hot, my friends. And be thankful for that place you finally came to and called home. And ask yourself why you stayed. If you are still a gypsy, ask yourself what it might take to stay, and what it might mean if you did.

The answers to those questions can really amazing. 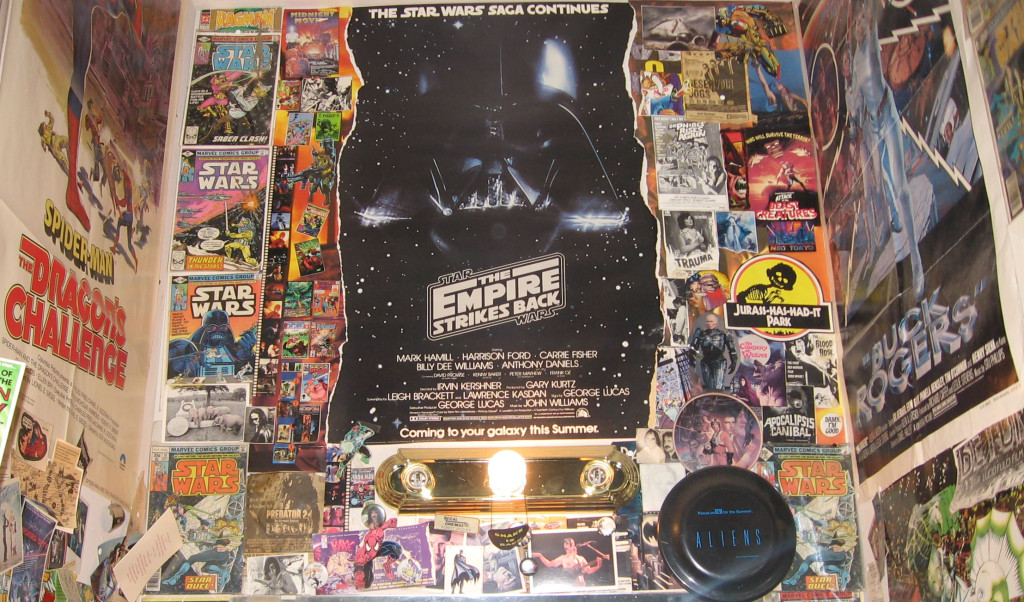 NOTE:  The images you see here are presented in semi-high resolution.  By dragging them to your desktop you can look at them a bit larger and see many awesome details of our insane wall collages!  Oh yeah . . . and BUY MY BOOK.  IT’S ONLY TWO EFFING DOLLARS! 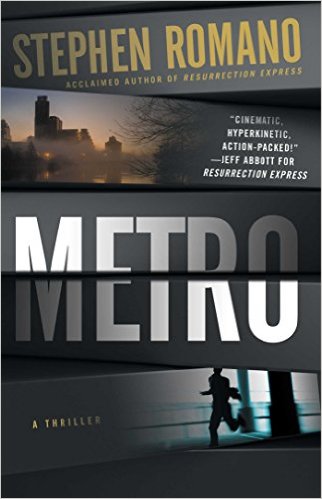