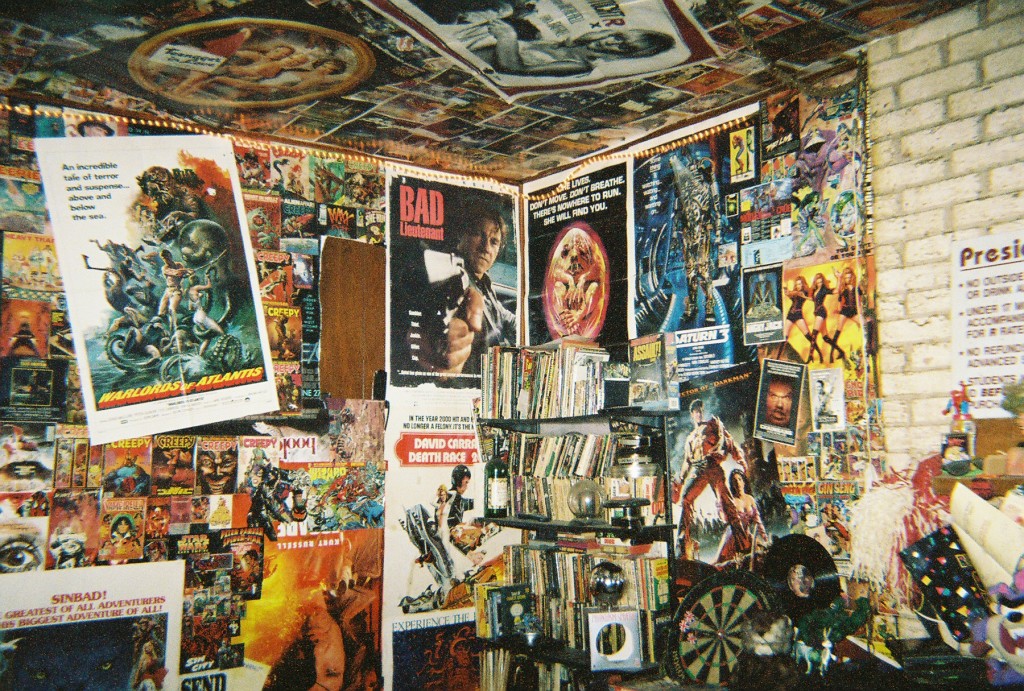 I was interviewed by a lot of people about The Kingdom.  One crazy young lady even wanted to feature us in her college journal for unique architecture in Austin.  Some of the articles are still out there.  Here is an abridged version of one of them, which you can read IN FULL by CLICKING THE IMAGE ABOVE.  (That photo is from The Kingdom’s final days, when we threw a party and auctioned off pieces of the wall collages to fund my cross country trip to nowhere that immediately followed; notice the missing slice? That paid for my gas.)  There’s some awesome photos of a MUCH YOUNGER me, floating around the house in my underwear.  (Hey, man, yer only young and gorgeous once.)  This particular article was among the most bizarre;a strangely tangential mediation on death that sort of shoehorns me into the mix.  I running it today because there’s a really awesome punchline to the whole thing, which I will explain later.  Suffice it to say for the moment that we at The Kingdom had a huge influence over certain people in the Austin counter culture scene, and our arms were always open to new recruits. 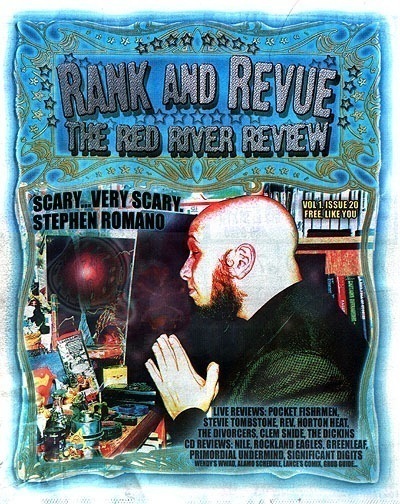 Halloween is upon us yet again, and the city of Austin is getting ready for another night of ghosts, ghouls and all the other creative death-appreciative costumes that the fine, sick and warped minds of this weird city can offer. Okay, maybe most of the costumes have nothing to do with death, but some make you wish you were dead. You gotta appreciate the spirit that this town emits when the dawn of the Day of the Dead approaches, though. Maybe one day we will come to celebrate the true tradition of Halloween instead of just another day to make bank.

I was on a mission to find a guru of sorts. I was looking for someone who could fill me in a little on the horror world. So, in honor of this upcoming celebration, I met up with a man who has become much acquainted with the different facets of our American appreciation of death, carnage, blood, gore and the like. What I wanted to do was get some references to this highly celebrated subject. I don’t know if I was really ready, but once I opened the gate, there was no getting the images of darkness back into their cages.

In this encounter, I came in contact with a vast array of plain driven horror. I won’t be able to sum it all up in a nutshell or anything, but I have definitely been introduced to the gates of hell and was let in for a look around. Ya know, it really ain’t all that bad. The Devil’s homies are just like you and me.

My perspective of when Stephen Romano sits down to write is that he doesn’t want you to just get the shivers. He also wants to feel responsible for what is haunting you. Scary, huh?! There is no pretty, innocent little girl getting slashed to pieces. If there was, it would probably be her fault somehow, because no one is innocent.

I sit down with Romano at the “kingdom” and talk about where he comes from and why he does the things he does. The walls are covered from floor to ceiling with every imaginable comic book and horror movie image. The TV screen flashes trailers from what I can only assume to be every single horror movie ever made; new images flash on the screen throughout the entire evening. This man seems to know a thing or two about a thing or two about killing and dying phenomena. You can take a tour of the colorful array of blood splatters and demon effigies on his walls with a special pair of 3-D glasses.

From opening up for Otis Day and the Knights at the age of thirteen at the pretty well- known Houston nightclub Fitzgerald’s to major litigation with a major music network over creative copyrights (and winning), Romano doesn’t really know when to quit or when he started. Who the hell does he think he is? I mean this is that guy that for years I have seen walk around town dressed all in black and with that mysterious black briefcase.  I now know that briefcase has been filled with books, comics and illustrations from various local artists for different projects that he worked on.

Romano has an imagination that intends on bringing death to your doorstep. He has worked on many different comics including The Gates of Hell (based on a Lucio Fulci screenplay), Phantasm (based on the movie by Don Coscarelli) and the Invasion of the Mutanoids, a full 350-page book full of sci-fi carnage filled with the most creative and dark images of the underworld of life versus complete carnal war.  Stephen Romano still loves Motley Crue, and, by looks of his resume and the traffic that comes through the “kingdom,” he still lives the rock and roll lifestyle. Well, I mean, between 30-day fasts and completely throwing off of the cliché of the rock star, he can binge drink with the rest of them. Mostly, though, Romano is concerned with work. He has at least five major projects in the works all at one time. So, as a writer, drummer, producer, figurehead and supervisor for the Xmachina comic book label, this 33 year-old dreamer has been involved with a collage of different artistic endeavors where he has been everything from the go-to guy to the mastermind of the whole damn operation.

Romano has done quite a few drugs, and he is not ashamed to tell you about it. “I was born in the asshole of the world, which is Houston, Texas—where you can cut the fungus with a knife out of the air. I hated that place. I really did. I moved up [to Austin] when I was eighteen because I had no scholarship, no money. I didn’t have nothing. I decided I was gonna cast my bread to the water and see what happens.” And ever since then, Romano has done just that.

There is so much going on here in our world of life and death. I am glad that we can all come together and celebrate our fascination of decay with no shame. Yes, we are all going to die. So, during our fixation with the epitaph and sling blade, maybe the only part that we are missing is that this Halloween thing is not only frickin’ pimp costumes and Superman outfits.

It is that pumpkin-headed man waiting with shiny blade to slit the breath out of your throat. It is your dead relatives still calling you from the grave trying to give you a message that they forgot to tell you when they were still alive. It is all the souls that died in lonely prison cells never to reach the light of day that will haunt our little planet. They all want you to remember them. If you keep running away from their voices, they will haunt you forever. If you keep your ears and eyes closed to the ones who came before, then on your day of death, will you be lost forever? And if so, who would you come back and haunt?

Okay, this is Stephen again.  The above photo is of the 3-D wall.  It was really in 3-D and you really had to wear special glasses to see it.

The author of this article had actually LIVED at The Kingdom not long before he “interviewed” me.  No bullshit.  All the stuff he writes about here were actually memories of his time there, which was a six month period  I refer to now as The Reign Of Saint Christopher.  That was because I shared the house that year with two guys who had the same first name, Chris 1 and Chris 2.  They were both as different as night and day.  Chris 1 was a freaky shut-in who made sculptures out of dead animal bones in his room, Chris 2 was a hip hop impresario who plied his trade in a really fun outfit called Oceanic.  (I wonder if they still play?)  The hip hop guy is the one who wrote this, by the way. (CLICK THE IMAGE BELOW to read the full article; it’s even longer and weirder in the original Klingon.)  Chris 2 and I would stay up sometimes for days on end, recording weird rap songs and boozing until we could hardly remember our own names, much less lyrics.  Chris 1 often ended up in the looney bin for weeks on end when he would show up at his doctor’s office to get medication, with self-inflicted knife wounds scrawled on his forehead.  They’d declare him a danger to himself and others and lock him up “for observation” and we would wonder where he was for days.  This somehow always seemed to happen, only when the rent was due.  Sigh.  Fun times. 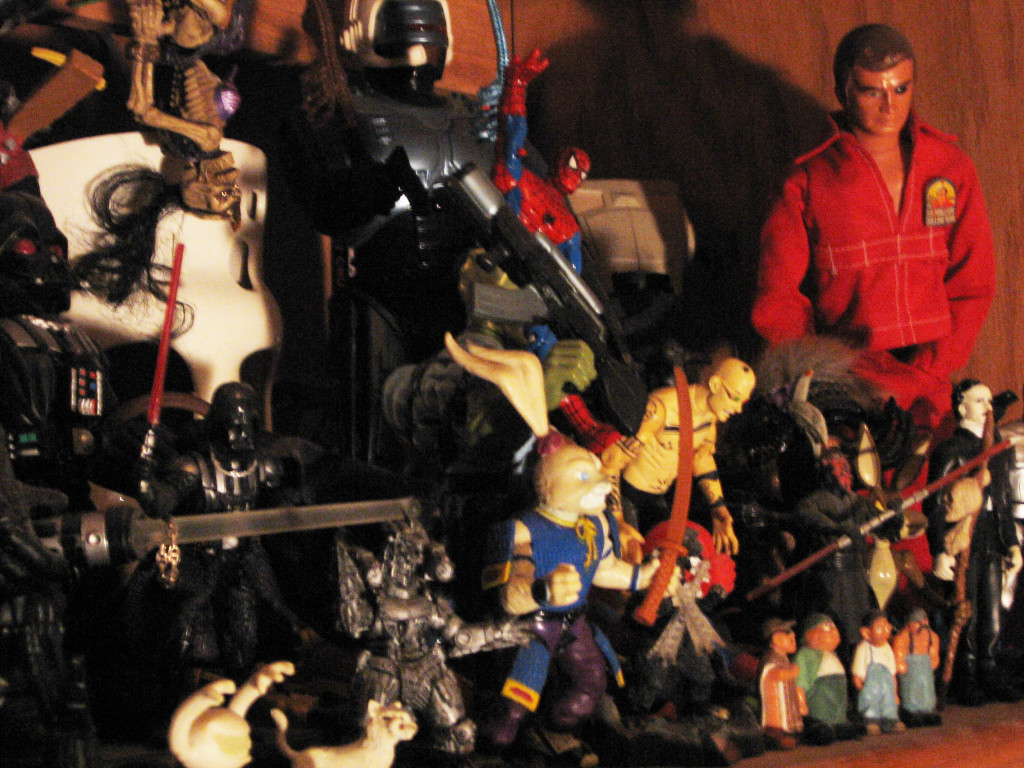 MY BOOK COMES OUT TOMORROW!

GET YOUR COPY NOW!