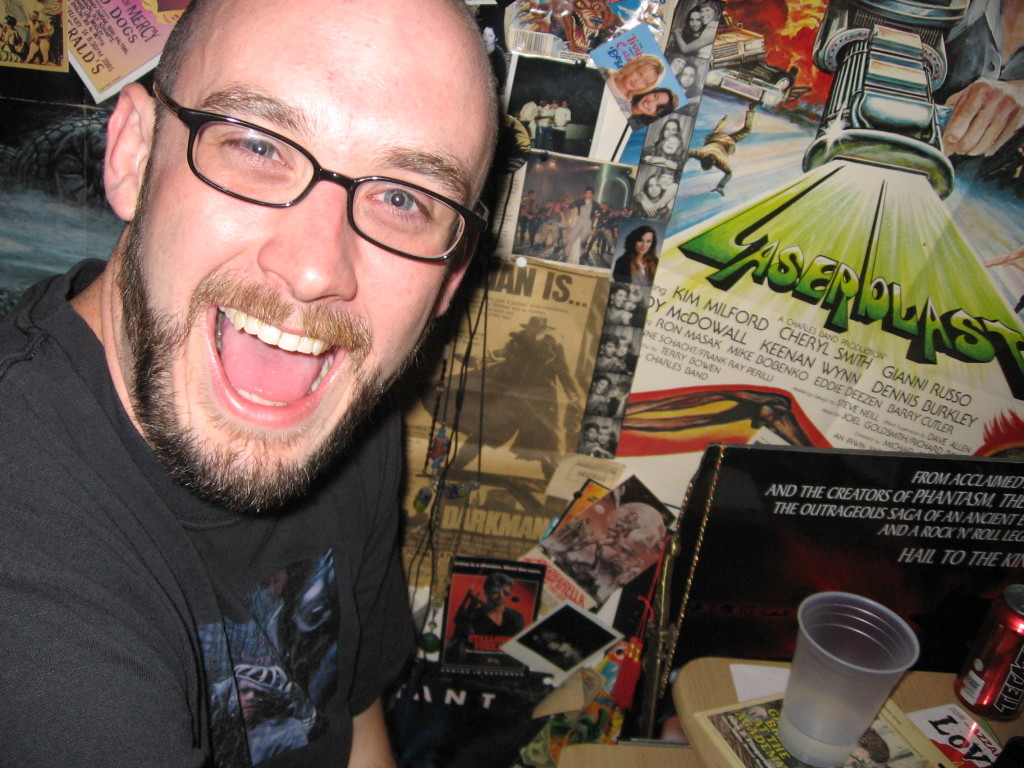 Ladies and gents, I give you Robert Jacques. One of the Prime Kingdom Founders. You pronounce his last name “Jacks.”  You pronounce his first name “Rob.”  I’ve named at least five characters in my books and comics after him.  I first met him when he was 23 years old and he, along with Joe Fay, led a wild new stream of youthful craziness into the place, after the original first guard vacated the premises for good. In the early days before their arrival, it was I who had been the young upstart. I was 23 when he moved in to that house. I was almost 30 when Rob and Joe came in, and suddenly I was the ‘wise old Jedi’ among a band of miscreant Padawans.  I felt really old then.  For about two seconds.  Then I went back to being in my 30s, and living wild, amazing adventures with The Boys.  It was 1999 when The Kingdom was finally officially forged (yeah, they even named the place) and the smell of STAR WARS, Lucio Fulci and Taco Bell was thick in the air, and we could do anything we wanted, just by being young and crazy.

Rob was a sensitive soul, a ladies man, an appreciator of all things artistic and awesome, and many other things to many other people.  He was one of my best friends in the entire world.  He still is.  But don’t take my word for it.  Let him explain . . .

10.) If you are going to be the chauffeur for a legendary horror director and his family during a three-night retrospective of his most famous movies, you better know goddamn good and well where the fuck you’re going, jack-ass.

9.) If you or someone you know begins to date someone that, while great in the sack, might be just a tad bit unbalanced, it is your duty as a friend to remind them to lock their front door on a regular basis. That way, when things inevitably head south, this unbalanced psycho will not walk into their house while no one is there, grab a cricket bat, and start breaking the shit out of every dish you own.

(That was my girlfriend, and yes, I should have locked the door . . .)

8.) Zombie-Ford knows all, and sees all. (And he’s got his eye on you motherfucker.)

(He refers to a bizarre image of Harrison Ford mutated with a paid of disembodied feminine legs that was plastered on the front door for years; people sometimes ran screaming several times in one night . . .)

7.) It is said that in this lifetime you will fall in love roughly 2-7 times. I learned that if you are hanging out with the right people, it can be 2-7 times per week. (If drugs are involved that number jumps to 4-12.)

5.) The best time to share your deep dark pain with someone is preferably around 3am.  After consuming a heroic amount of whiskey with them.  Right after you just finished watching the movie XTRO. It will bond you together like few things will.

4.) If you are drinking a lot of beer with your roommate while listening to Grand Champeen’s “Cottonmouth” at top volume, it’s best not to slam dance in the dining room while holding a power drill. People might* get hurt.

(*People absolutely will get get hurt and will also have to go to the emergency room.)

3.) Every Tuesday should be a Happy Tuesday.

(He refers to Toni Price’s Happy Tuesday shows at the Continental club, where I once picked up a crack whore; but more on that in the future.)

2.) At the end of a nice long acid trip with one of your best mates, the best thing you can do is put on Ralph Bakshi’s HEAVY TRAFFIC around 4am. Then when it ends, walk out in the early dew soaked day for a last smoke before you finally hit the sack. It is in this moment you will realize what life truly means, and the clarity you feel will never be felt again. These are the moments that end up as pieces of our soul.   At least until you wake up vomiting the next day.

1.) The pain we feel often is only healed by those who are there when we feel it. It might be holding your drunk friend while you both try to process bad news about another close friend’s Dad. It might be listening to him play Tom Traubert’s Blues “Waltzing Matilda” on a loop for an hour on end after he’s suffered a break-up while you offer an ear to listen, and a shoulder to comfort. Or it might be getting hugged underneath the deck behind Jovita’s because you’re too drunk & scared to figure out how you love someone. These are the moments that matter most.

We are born with one family, and we build for ourselves another.

Another family that understands us in ways no one else can.

It’s a family that will flip over a couch as quickly as flip out over a bootleg copy of KUNG FU HUSTLE. I spent the best of my twenties with this family.   All of us bungled, botched, insane, and beautiful. The walls were plastered with our passion, and the floors were covered with our beer, our tears, and our blood*. I will never feel as free as I did then. Back when we all belonged together in a cave full of film, friendship, and smoke.

(*Yeah, blood sounded better, but really it was vomit. There was a lot of vomit.)

“Feel the filth and dust, man, blowing into my eyes and the stench of piss and shit and vomit and old beer cans, man, up my nose. We’re back, man, where we belong.” 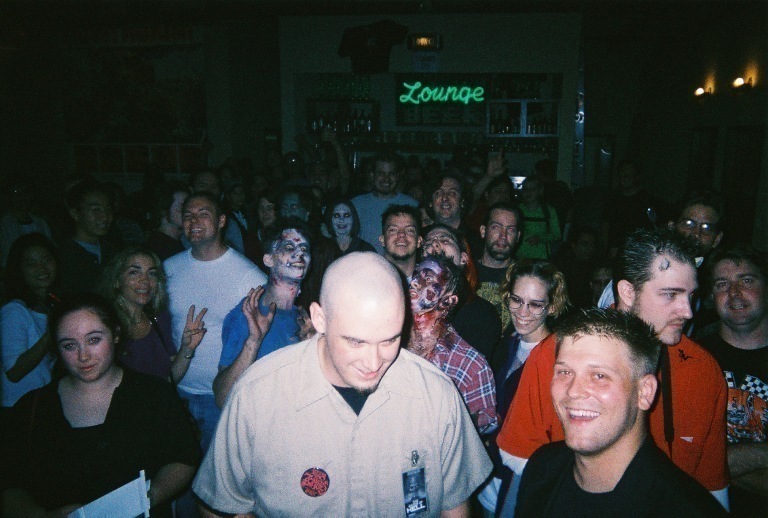 Stephen here.  Thanks, Rob.  Obviously your remembrances, and the remembrances of all my friends who have come forward during this time, trigger great flashback passions, most of which are impossible to properly convey to an outsider.  All we can do is use words.  Still and all, as subjective as all of this is, I’d like to add something, Rob.  About that night when Marc brought over that bootleg copy of KUNG FU HUSTLE and we all did dangerous drugs and I finally got to kiss Jessica Alverez, for the first and last time.  That was one of the best nights of my life.  And you made it so much better, right over my shoulder the whole time, until the end of the movie, when I was sure the Master was getting his ass kicked again, and you whispered in my ear: “No, man . . . PEACE.”  And so there was peace.  We all sat there stunned, the way people are supposed to be in moments like that.  I felt pure and open love moving through me like innocent wine.  I felt your incredulous awe simmering like cherry-flavored mist in the air.  It might have been my most cherished moment of that whole year, had every other moment not been just as amazing.

My mother died just four months later.  My world was never the same.

But that was still one of my Favorite Years of The Kingdom.