This week at RETRO 13, I’m celebrating HELLRAISER with a unique new poster that features one of my very best friends, the amazing miss Ashley Laurence. She plays Kirsty in the film, silly you.

CLICK ON HER IMAGE ABOVE to see the full poster.

I met Ash ten years ago, at the launch party for my first film, which was part of the Showtime MASTERS OF HORROR series. That was a nutty party—and total nirvana for a newbie horror fan like myself. The gimmick of MOH, you see, was that each episode was a “mini-movie” directed by a really famous horror guy. I had written the episode to be directed by Don Coscarelli, of PHANTASM fame. So that night, in a dark sleazy dance club just off Hollywood Boulevard, the fright film celebs came and went, making their grand entrances across the red carpet. (I’m not kidding about that either—it was a real red carpet, with pushy flash-bulb paparazzi and everything.) As I circulated among the warm bodies that night, wearing a leather jacket and a BUBBA HO-TEP t-shirt, I made friends with many of my heroes. Joe Dante, George Romero, Stuart Gordon—you know, the A-Team, baby. Later in the night I presented legendary PHANTASM actor Angus Scrimm with his copy of the screenplay for our episode—which contained a role Don and I had created especially for him. (Angus called me later at the hotel to say it was one of the best scripts he’d ever read.) Joe Lansdale and Dave Schow and Tobe Hooper were all there.  I met Drew McWeeny and Steve Susco for the first time. I got to kiss (quite chastely) Romero’s then-wife, the legendary Christine Forrest of KNIGHTRIDERS. I even hooked up with my old buddy Greg Nicotero and he invited me to KNB the next afternoon to watch makeup tests for LAND OF THE DEAD.  Surreal. 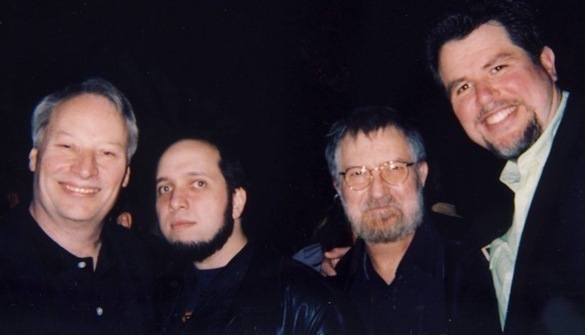 The A-Team.  Joe Lansdale, Tobe, Don.  And some asshole.

Everyone who was anyone knew about the importance and prestige of MASTERS OF HORROR—and everybody wanted in on it, too. If you were in the biz of scaring people, it was a BIG DEAL. Tons of hopeful actors packed the place that night, from old pros to complete newbies. Robert Englund threw his arms around me at one point and started talking to me like I was his best buddy—then backed away slowly when he realized I was a complete stranger. I think he actually thought I was the owner of the club. Classic. I struck up a conversation with a nice young manager-type named Chris because I was still looking for representation back then—but I forgot all about the guy (and my misbegotten career for that matter) when I realized who was standing next to us. It was one of Chris’s clients. An actress, of course. Stunningly beautiful. Big smile. Amazing. “Stephen, meet Ashley Laurence,” Chris said.

In a sudden rush of paralyzed what-the-fuckness, I took one step back from Ashley, drew a huge breath into my body and screamed as loud as I could over the dance music:

Believe it or not, she didn’t think I was crazy after that.

In fact, she dragged me over to the red carpet, shoved my camera into the hands of one of those paparazzi jerks and had him snap this lovely photo of us: 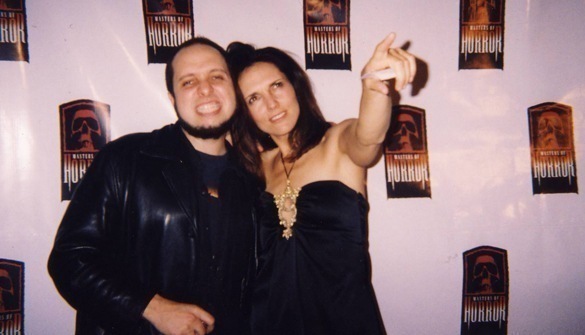 This was literally the MINUTE I met Ashley. How many of your best friends can you say that about—that you have a photo of the look on your face when you fell in love with them?

I’ve always believed I was put at the MOH party that night to meet Ashley.  She is the one friend I made that night that mattered.  I have a fairly wide circle of best friends, actually—like most people, I think—but Ashley remains in the top five to this day. We look after each other. And we’ve even worked together professionally a couple of times. She is a genius actress, an accomplished artist, and an awesome lady.

And speaking of art . . . this week’s RETRO 13 is dedicated to miss Laurence, and to the memory of how we first met.

Thanks, Ash. You make life good.