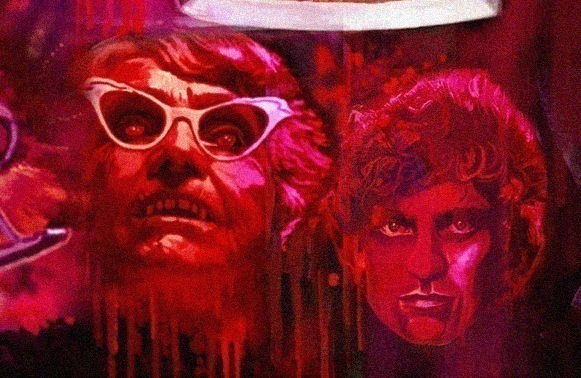 Never been too big on Vampires.

Sometimes they’re fun schlock—as in most of the Christopher Lee DRACULA series at Hammer, which I have glorious memories of marathoning with my buddies back at the Kingdom—and sometimes they can be just dumb.  Still, occasionally, there’s an intriguing, original movie in the bunch, as in CRONOS, NEAR DARK and THIRST.  This is just me, folks. I could be (and probably am) wrong. It’s all art at the end of the day.

THIRST an odd Australian import that I never knew what to make of as a kid—and it’s a somewhat clumsy beast, I suppose, but it’s originality cannot be overlooked, along with its creepiness, style and wit. Oh, yeah, and Henry Silva. He classes up any joint he walks into. Even this one: 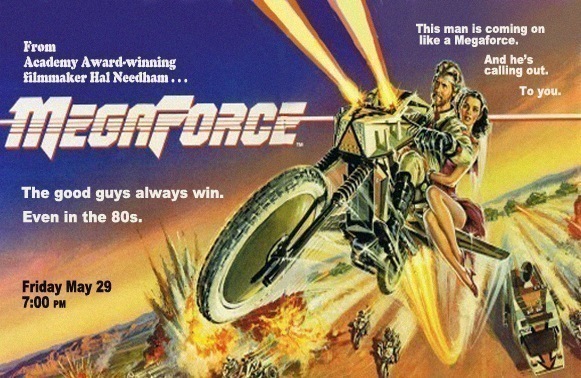 This week’s Retro 13, which you can only see at Dread Central by CLICKING THE IMAGE ABOVE, was another art job originally commissioned by the same folks who hired me to do STRANGE BEHAVIOR. It was 2-in-1 job, actually. I was supposed to do STRANGE and also THIRST as part of a package deal. They didn’t much care for the first draft of either piece I delivered. These things sometimes happen in the business. You can’t please everyone all the time, apparently. What you see in my poster this week at Dread Central is the “revised” version of the key art for THIRST that was re-submitted to the client, after I received some very cryptic notes from a person who claimed to be in charge of things over there. Obviously, it didn’t help.  (I’m still waiting to hear back from that person, come to think of it.)

I bring this amusing little anecdote up again this week, not to air sour grapes in public, but as a further word of advice to any artists who may be reading my Retro 13 posts:

I mentioned a few weeks back . . . NEVER THROW ANYTHING AWAY!

In the case of THIRST, I was able to work through several new versions of the art I started and eventually I came up with something really striking and cool for my Retro 13 series.  I knew I was on to something.  Just had to find the motherfucker.  You can see an earlier draft, if you CLICK ON THE LINK BELOW. This will take you to my RETRO 13 PLUS gallery, where all sorts of fun odds and ends related to this series are archived.

This image is actually from an even earlier draft, in which I included Robert Thompson, who has a fairly minor role in the film. I wanted to include him because, of course, he’s Patrick from the 1979 classic PATRICK. But, as a wise man once said, you can’t have everything–where would you put it?  In this case, I just ran out of room to have the whole cast in there, without some it turning into some bloated overstuffed monster.

Which leads me to a word about COMPOSITION in movie posters.

Composition is KEY.  Especially when you’re going old school.  You have to look at the film carefully when you’re doing stuff like this. You have to understand its ebb and flow. What will sell it best. What the movie is actually about.  I’m not generally a fan of the “scenes from the movie” approach, especially with horror films.  It can be just too much.  People just cram too much shit in the frame and it ends up looking silly.  A good example of how to come at an ambitious layout is the Drew Struzan classic BIG TROUBLE IN LITTLE CHINA: 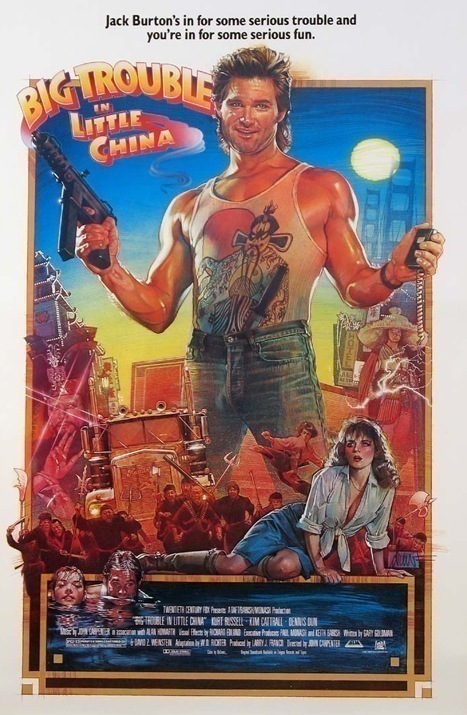 Yep, there’s lot of shit in there.  And yet see how Drew has gone for lots of negative space and a large central figure to anchor the disparate collage nature of his composition.  It’s really kind of brilliant.  In the melee, there are only three main focal points: Jack Burton (Kurt Russell), Gracie Law (Kim Catrell, pictured just above the credits), and Jack’s truck, just above Gracie’s legs, surrounded by kung-fu fighters. The truck element is set apart from the two other main focal points in a color scheme that relegate it to a background image, so that the big fight does NOT overpower the basic simplicity of his design.   But if you look hard enough, there are three additional elements to enjoy, including a key moment with Jack and Gracie.  This is a deceptively SIMPLE composition.  Some might still make the case that this is some sort of exception to my rule, which is fine, but then again BIG TROUBLE IN LITTLE CHINA is the kind of barnstorming goofball freakout film that invites a really cool poster with lots of stuff.  Also, from a technical standpoint, Drew’s art is typically gorgeous, capturing the feel of BIG TROUBLE, with just the right colors.  It’s all about knowing your film.

On the other hand, Drew also gives us a master class in Less-is-More with THE THING: 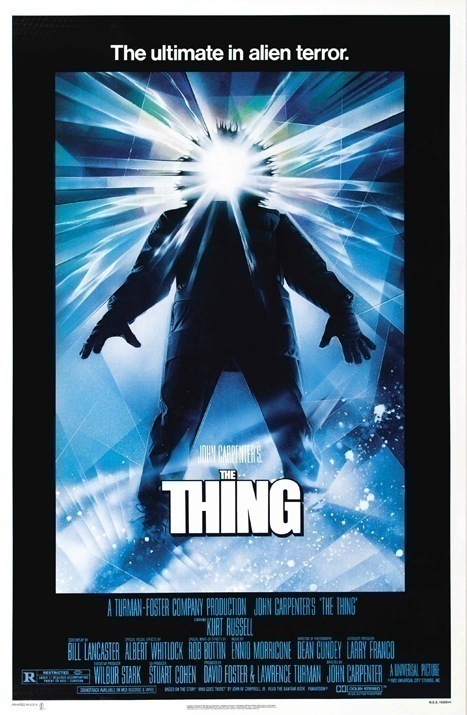 It’s perfect.  And there’s only ONE key image.  The color scheme and concept here represents the film perfectly, without telling you anything that would spoil the horror or reveal the identity of the characters–which, in itself, is a sly comment on the nature of the screenplay. It’s also “black and white in color,” as Carpenter intended THE THING to be.

You have to look at your film carefully.

Of my own work, I’m particularly fond of this one I did for Richard Griffin’s film BEYOND THE DUNWICH HORROR: 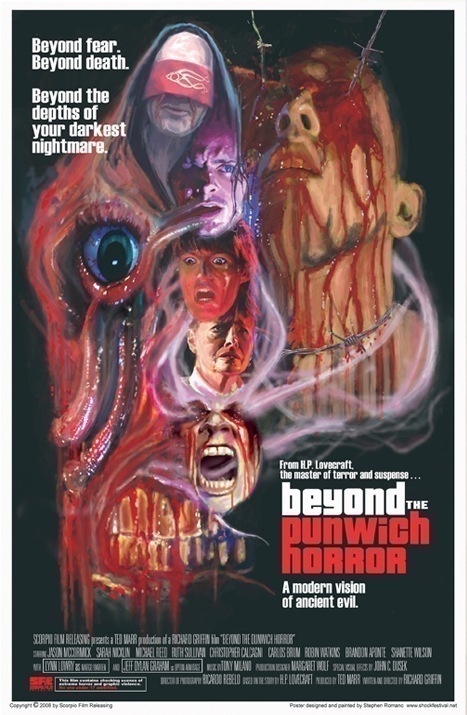 It gets in your face, but it also knows when to quit. An irony here is that I never even saw the completed movie when I was working on this.  I only saw still photographs and worked from a rough description of the story provided by Mister Griffin.  I was able to discern, however, that we needed a mid-80s collage effect that was bloody and freaky, but contained just a few key focal points. My basic inspiration was the poster for SPOOKIES, an actual mid-80s monster movie: 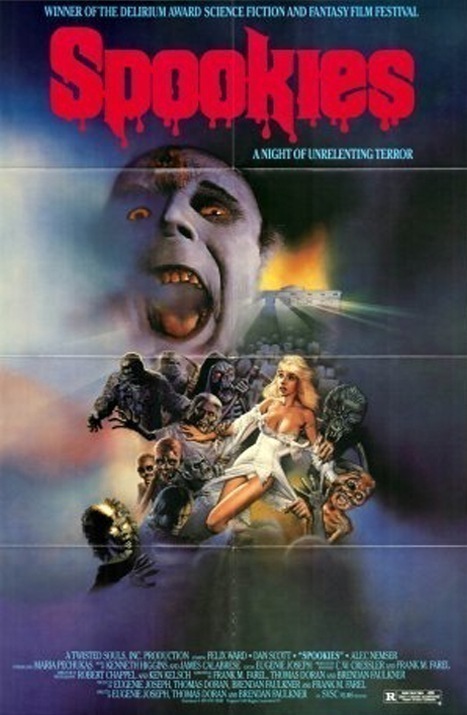 You can see that I went for a similar color scheme and the same basic composition effect.

In the case of THIRST, I subtracted elements from the “working draft”until the balance was just right.  In my earlier version (CLICK HERE TO SEE IT), I may have been going out of my way to play up the science fiction angle of the film—but I ultimately decided to drop most of that, in favor of a completely retro-1970s approach, with a white background. The American release poster, pictured BELOW, probably did the sci-fi angle just fine, and so mine should be different.  Although I DO have to say that the vampire cape on the doctor looks like it’s tacked on, and the key image of the woman is generic and wastes a lot of negative space. 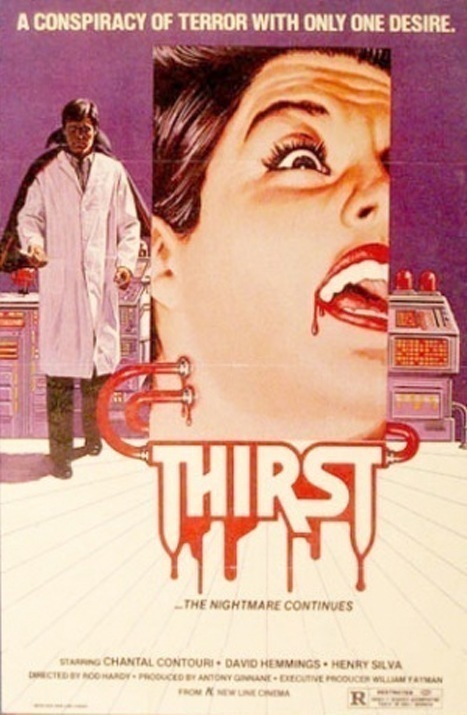 But you can’t have everything, folks.

Where would you put it?