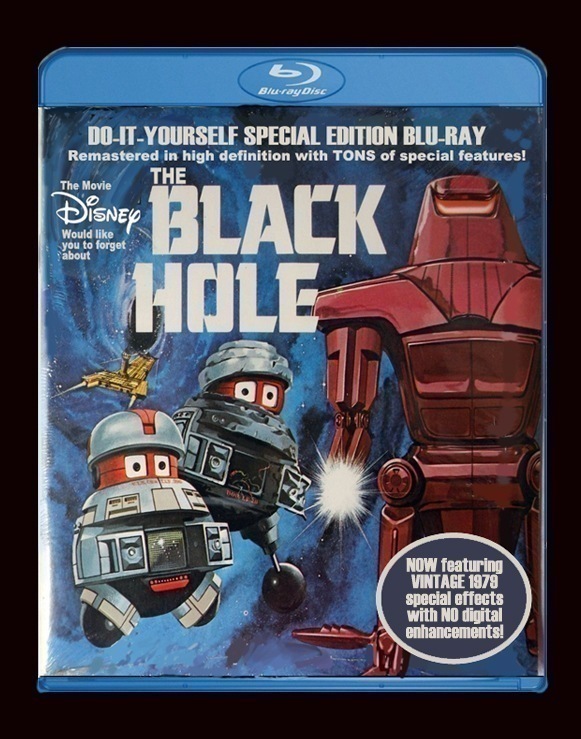 Someone just asked me at Twitter today if I was ever going to produce a “special Blu-ray collector’s edition” of THE BLACK HOLE, Disney’s amazing 1979 STAR WARS knockoff, which is really a gothic horror film, which is so incredibly insane that it must be seen to be believed in today’s day and age.  (Don’t worry, hipsters, they’re remaking it now.)  I guess the request came because I’ve done this sort of “special edition Blu-ray collector’s edition” thing in the past, with the Italian STAR WARS knockoff STARCRASH.  (Indeed, I actually I co-produced that 2-disc set at SHOUT! FACTORY.)  Also I am a huge psycho-fan of THE BLACK HOLE and know practically everything there is to know about the making of that particular film.  Visit my Halloween For Christmas Blog by CLICKING THE IMAGE BELOW for a brief tribute. (It’s at the end of the article.) 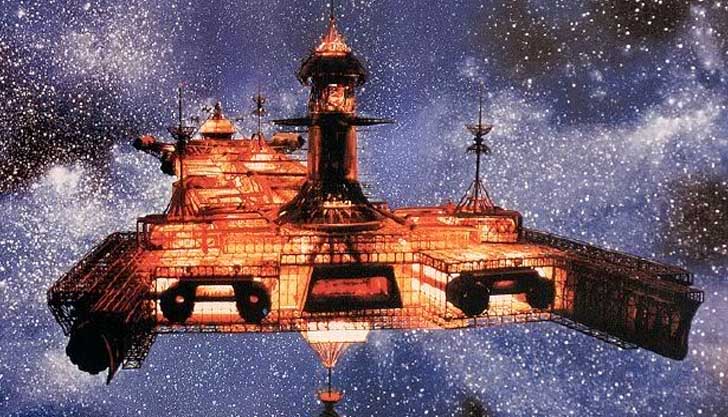 But, Alas, no.  There are zero plans (currently anyway) at my ranch for an official BLACK HOLE Blu package anytime soon.

HOWEVER . . . as you may have gathered from the image above . . . YOU SIMPLY DO NOT HAVE TO PUT UP WITH THAT.  We live in AMAZING TIMES, my friends, and almost anything is possible, with a little help from the internet.  So, just for anybody interested, here’s the SPECIAL EDITION BLACK HOLE BLU RAY DO IT YOURSELF PACKAGE.  The awesome, super-bad, come-and-fuck-me box set of the classic sci-fi- film which you put together yourself!

Here’s how it works.

First, go to Amazon. To this link right here:

At this link, you be able to purchase the streaming version of THE BLACK HOLE, in stunning high-definition.  It’s a beautiful transfer of the film in 1080p, the same used for the 2004 Disney DVD release (only it looks lots better!), and it comes complete with all the original sound, zero image cleanup, and absolutely NO additional digital special effects shots pasted in!  It’s the pristine ORIGINAL version of the movie, as intended to be seen in 1979 and preserved historically for all to see. (Disney, please take note.  And talk some sense into Old Man Lucas whole he’s still alive.) This is important because THE BLACK HOLE was the one of the most innovative special effects movies of its day.  You need to see these shots as the technicians actually  executed them “back in the day,” with all those glorious matte paintings, photochemical optical composites and breathtaking scale model work.  This is where it all started, kids. And it’s beautiful.

“But wait, Steve . . . what about all the awesome documentaries and special features?  We need this do-it-yerself-edition JAMPACKED with tons of amazing STUFF that will tell us everything about this innovative movie and make us psycho-fans also!”

Well, since I don’t have time to record a commentary for this baby (I did TWO for STARCRASH), we gotta go old school on the special features, too.  Click this IMAGE BELOW: 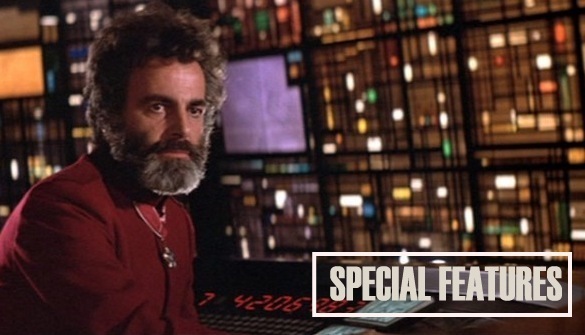 At that Amazon link, you’ll find at least several copies of the definitive source guide to the making of THE BLACK HOLE, available at a reasonable price.  It’s an exhaustively researched and beautifully illustrated book-length double issue of CINEFANTASTIQUE, the magazine which, in the 70s and 80s, was the Film Comment of the genre.  For a few bucks you can order this amazing book, which will reveal all about the script development, rocky production period, innovative visual effects, and much more.  (If it gets sold out there, I have one other word for ya:  EBAY.)  The book doesn’t cover the music as well as I would have liked.  But for the definitive treatment of John Barry’s classic score, which is among my personal favorites of his incredible body of work, go here: 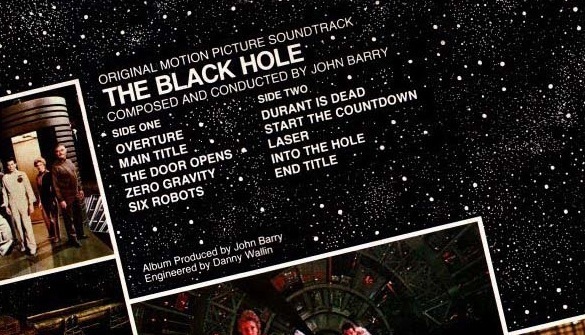 And REMEMBER . . . THE INTERNET IS YOIR FRIEND when it comes to psycho fans of THE BLACK HOLE.  There are literally hundreds of images, interviews, fan retrospectives and reviews, and TONS of awesome “SPECIAL FEATURES” available, just at the click of a Google, such as this rundown of awesome toys (some un-produced) from the film: 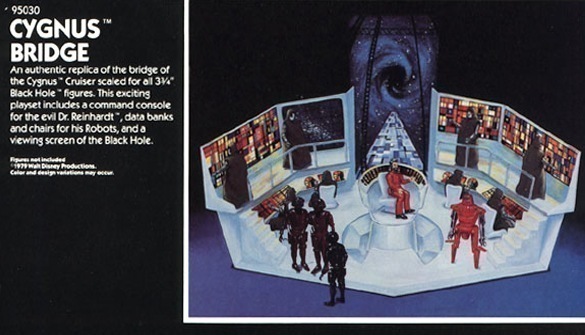 This was a heavily merchandised motion picture back in the day, kids, and the evidence is out there for all to see. 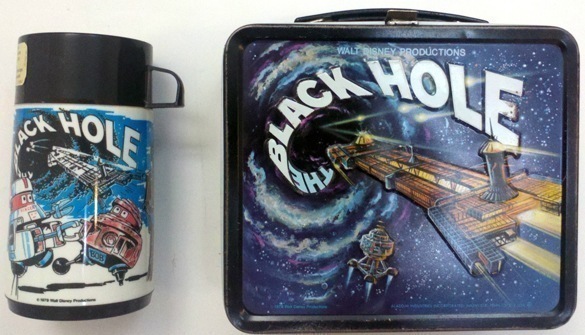 So there you have it!

The Ultimate Black Hole Special Edition. And Disney didn’t have to lift a fuckin’ finger.

Neither did I, for that matter.  Except to write this silly blog.  But it’s Easter and I’m having fun!  Tomorrow I get to go back to revising my new novel, which due out in September from Simon and Schuster: 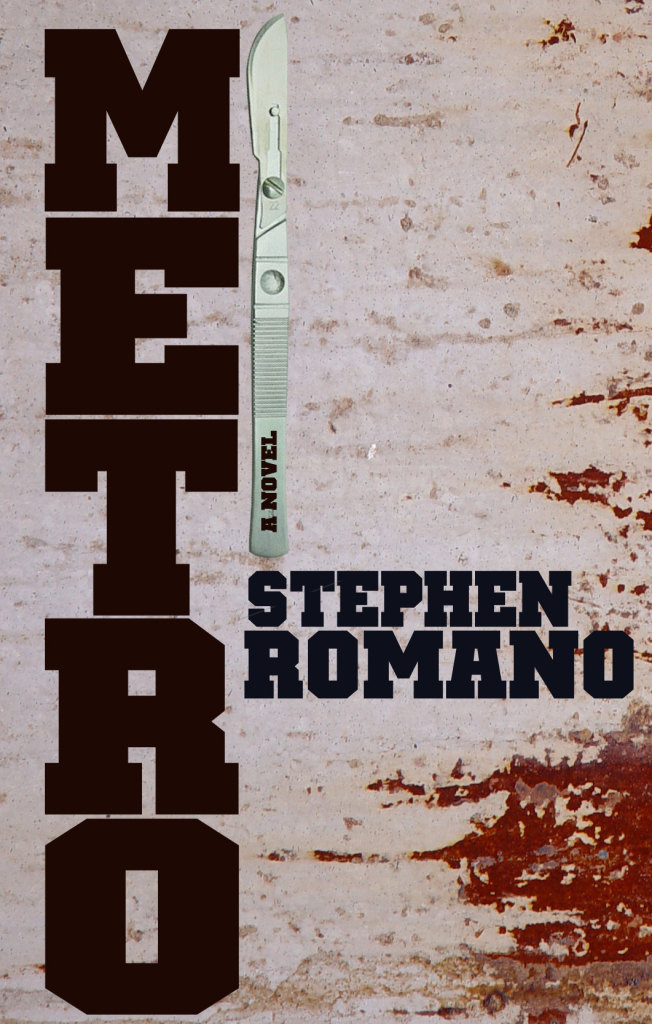 Peace in the galaxy.