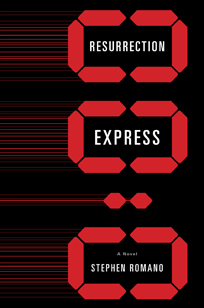 Hitting the street in September 2012, Resurrection Express is Stephen Romano’s career-defining debut thriller from Gallery Books at Simon and Schuster, combining elements of ultraviolent action, dark intrigue and deeply felt characterization with a unique cinematic spin on the traditional mainstream “male action” genre. The book is a highly-anticipated release in the industry, described by early readers as “Mission: Impossible” meets “The Borne Identity” directed by Quentin Tarantino.” For updates and essays regarding this game-changing new novel, check in with Stephen’s BLOG, and the NEWS feed for all the updates.

RESURRECTION EXPRESS whipsaws along at 100mph, with so much momentum that if the reader feels like if they hit one bump they’ll go straight through the windshield.”Tom Piccirilli, author of the international Thriller Writers' Award-winning novel The Cold Spot

There is no code Elroy Coffin can’t break, nothing he can’t hack, no safe he can’t get into. But for the past two years, he’s been incarcerated in a maximum-security hellhole after a job gone bad, driven to near-madness by the revelation of his beloved wife’s murder.

Now a powerful and mysterious visitor who calls herself the “concerned citizen” offers Elroy his freedom if he’ll do another job, and sweetens the deal with proof that his wife might be still alive. All Elroy has to do is hack into one of the most complicated and deadliest security grids in the world—clear and simple instructions for the best in the business. Or so he thinks.

Quickly drawn into the epicenter of a secret, brutal war between criminal masterminds, Elroy is forced to run for his life through a rapid-fire labyrinth of deception, betrayal, and intrigue, where no one is to be trusted and every fight could be his last... and the real truth hidden beneath the myriad levels of treachery may be too shocking to comprehend...

Resurrection Express is a game changer for me—my first big solo novel from a legendary New York publishing outfit.  Gallery Books at Simon and Schuster has a long, long tradition of greatness, from their legendary Pocket Books imprint to their current roster, which includes heroes of mine such as James O’Barr, Stephen King and Don Winslow.  I’ve written other books before, but none of them come close to what I’ve done here.  It’s a really ambitious book that does certain things I’m not sure have ever been attempted in this type of thriller.

I wanted to take that whole Jack Reacher type of genre and really do a number on it—shake up the rules a little.  It’s really a mystery story about obsession and revenge and love at the center of everything, but I wanted a real action-packed roller-coaster, with the breaks cut off.  A story in which anything can happen at any time and you can’t ever trust the ground under your feet.  One minute your running like hell from the bad guys, and the next the sky might be falling and there’s nowhere to run at all.

I developed the book in 2010, which was a very exciting and productive year for me.  It reflects a lot of the hungry energy from that period.  And we’re keeping the story of Elroy Coffin going, too.  He’ll never be the same after what happens to him in Resurrection Express . . . but there is a pretty stunning second chapter in the saga coming.  It’s currently called The Suicide Contest.  Be afraid.  Be VERY afraid.

Released in 2008 from IDW and still available in hardback, Shock Festival was Stephen Romano’s crowning achievement as a champion of tacky exploitation cinema and the history of the medium, through a breathtakingly illustrated novel, in the mode of SPINAL TAP meets GRINDHOUSE. Met with overwhelming rave reviews, the book is a 350+ page full color assault on the sense that chronicles the lives of fictional B-movie players, as they hack their way through an alternate universe of faux cinema history, replete with the most outrageous stories you’ve ever encountered and over six hundred pieces of “rare memorabilia,” created exclusively for the book.

The faux posters created by Romano and his art team were so popular and caused such a buzz among the Hollywood horror elite that they were eventually featured in three major motion pictures: THE HILLS RUN RED, CHILLERAMA and JOHN DIES AT THE END.

An illustrated history of 101 of the strangest, sleaziest, most outrageous movies you've never seen! An elaborate work of illustrated fiction, SHOCK FESTIVAL is a raunchy, hilarious tall tale of imaginary sleazebag exploitation films, lavishly brought to life with hundreds of exclusive, never-before-seen original movie posters and memorabilia items! It's the retro-dazzle of GRINDHOUSE meets the authentic 'mockumentary' appeal of SPINAL TAP in over 350 full color pages! From wild monster flicks like UNIVERSE OF BLOODY ZOMBIES; to the streetwise blaxploitation of CHOCOLATE CHERRI ON TOP; this illustrated epic is guaranteed to blow the most jaded movie geek's mind . . . and leave everyone else cheering in the aisles for more!

One of the greatest homage to B-cinema ever undertaken... SHOCK FESTIVAL is a breathtakingly thorough overview of over 100 movies and a slew of filmmaker and actors who never existed -- but which you'll believe actually did by the time you finish reading. And your eyes don't even have to touch the words to be convinced, thanks to the down-to-the-smallest-detail perfect collection of posters, newspaper ads, still photos and other visuals Romano and his art team have created.Fangoria

Take a drop of Joe R. Lansdale's blood. Then a slice from David J. Schow's scalp. Scrape some phlegm off Tarantino's tongue. Inject some of Robert Rodriguez's sperm. Pour in some Karo syrup. Mix it in a blender. Pour. These are just some of the ingredients of Stephen Romano's unique work... If the buzz surrounding his new book, SHOCK FESTIVAL, is any indication, Stephen Romano's work will not only turn heads, it's going to make heads roll!ChuckPalahniuk.net

BEST BOOK OF 2008! While the term mockumentary practically wrote itself, it's going to take a clever writer to describe Stephen Romano's fictional alternate history of exploitation films ... (Romano) has created a vivid universe filled with films you'd love to see and personalities you'd line up at a convention to meet, lavishly illustrated with a plethora of eye-popping posters, lobby cards, on-set still and ad mats for such fictional films as THE UNDERTAKER AND HIS WIFE and STARFIRE BEYOND THE GALAXY... Fans swept up in the recent wave of grindhouse nostalgia NEED to buy this book!Rue Morgue Magazine

Shock Festival was the definitive end of a certain period in my career—kind of like winning an Oscar for being a starving artist.  It’s the kind of thing you usually only get away with once, when you are young and crazy.  I was at the end of my thirties when I did it, and it almost killed me.  It was such an ambitious thing that it took literally two years to finish, and I had to do so much of the work myself.  But I’m still really proud of what it is.  It was somewhat misunderstood, too, even by its own publisher.  A few reviews at the time pointed this out, but a lot of people still don’t understand that Shock Festival is an actual novel about people, not necessarily just movies.

People look at all the flashy artwork we did and get distracted by that, but they’re really missing out on something special by skimming the text.  It’s big and epic and it has a cast of characters as diverse and expansive as stuff like The Stand.  There is not a book you can name that does what Shock Festival does and I’m damn happy about that.  But original work like this tends to put you in the poor house, you know?  Like I said, y’gotta do this when you are young and have less to lose.  The amazing thing was that, even though the book did moderate in terms of sales, I started getting all these offers to do everybody’s movie posters after that.

One of the highlights was getting to work for Grindhouse Releasing on the theatrical re-release of Maniac.  Also, some movie director buddies of mine called up and asked if they could use some of the posters in their films.  That was a real trip!  CHILLERAMA and THE HILLS RUN RED came out great, and I thought Don Coscarelli used my posters particularly well in JOHN DIES AT THE END.  All of that was a factor in kicking off a new wave of resurgence in old school movie poster art.  So it got me through a few lean years and we helped start a trend.  Plus it’s one of the coolest books ever printed, man.  No bullshit.

Released in October 2011 from Mulholland Books at Little Brown and Company, Black Light is a supernatural thriller novel, which is a collaboration between Stephen Romano and the top Hollywood screenwriting team of Patrick Melton and Marcus Dunstan, who wrote many of the SAW films. Met with enthusiastic reviews at the time of its release—Kirkus called it "Ghostbusters with bloody mayhem on steroids"—the book was quickly optioned by Hollywood super-producer Michael DeLuca and is now currently in pre-production as a big budget feature film.

If you have a supernatural problem that won't go away, you need Buck Carlsbad: private eye, exorcist, and last resort.

Buck's got a way with spirits that no one else can match. He was normal, once. Until Something Horrible killed his parents and left him for dead.

Buck has spent years using his gift to trace his family. It's his only hope of finding out what happened to them-and what made him the way he is.

Now the voices say that something big is coming. Buck already knows what it is-a super high-tech bullet train running express across a stretch of unforgiving desert known for the most deadly paranormal events in history. A place where Buck almost died a few years ago, and where he swore he would never return.

But as the train prepares to rumble down the tracks, Buck knows it can only be the inevitable hand of fate pulling him back to the most harrowing unfinished case of his career at four hundred miles per hour.

Black Light was an offer I literally couldn’t refuse. It was actually pitched to me just after I wrote Resurrection Express, and I hadn’t sold Resurrection yet. This deal with Patrick and Marcus was sort of already in place, and I appreciated the opportunities it represented, so we started working on the story together. I put Resurrection on the back burner for a year, which was something I really didn’t want to do... but again, it was an opportunity I couldn’t pass up. I needed the money and I really wanted to work with these guys. I came up with some ideas that expanded Patrick and Marcus’s original storyline a bit, and it went really smoothly. They are amazing guys and rare collaborators in the whole Hollywood scene—guys who walk it like they talk it.

There was a bitter irony to the whole thing, though: The project moved forward so fast that we had just a few months to prepare the book from ground zero. The whole experience of writing and going through the publishing process on Black Light was like a sort of training ground for me—I learned a lot of dos and don’ts.