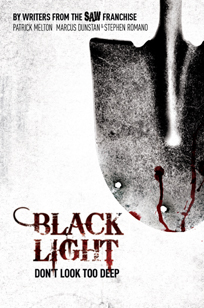 I’ve  just finished my commitment to BLACK LIGHT, a suspense-action novel written in collaboration with PATRICK MELTON and MARCUS DUNSTAN, the scribes responsible for the last four films in the SAW series. Begun in November of 2010, the BLACK LIGHT project was completed in record time, which meant no rest for the wicked on a brutal schedule . . . but the results are wild and epic, coming to a bookstore near you on OCTOBER 5th 2011, just in time for the Halloween season!

The schedule was insane.  We had less than six months to write, edit and prepare the book for release! That’s half the normal time allotment for a full-length novel released by a major publisher. But we knew that Halloween 2011 was the right time to release, since the SAW films have basically ended and this was the first year in seven that there wasn’t gonna be one in theatres for the holiday season. What you’ll be getting this year instead from “the boys” is a novel that is pretty much unlike anything you’ve ever read before.

With a premise that plays like Stephen King channeling Raymond Chandler through a high-concept action movie, BLACK LIGHT deals with the adventures of Buck Carlsbad, a haunted private investigator from Texas with a talent for sniffing out and snuffing out bad ghosts. When he gets in over his head with some especially nasty demons on a futuristic bullet train going six hundred miles an hour through a cursed desert, it’s bad news for Buck, as he unravels the bizarre mystery of his past, and even fights to protect the life of our next president! The last half of the book is a nonstop roller coaster ride.  There’s a lot of care taken with the character of Buck, and he’s set up really well in the opening chapters. He’s this haunted guy with a lot of demons in his past—literally! It’s a real one-man-versus-the-world kind of story . . . and then we just pull the breaks and let it all crash through a series of amazing action beats, sort of like an early James Cameron film. It’s just wild, wild stuff. People will be worn out just from flipping the pages to see what happens next!

BLACK LIGHT bows from Muholland Books, an imprint of Little Brown and Company, the second largest publisher of popular fiction in the world, who bring us James Patterson and the TWILIGHT series.  Yeah, I’ve sort of gone legit, I guess.  Wow.  And I have another novel of my own coming out next year from an equally large publisher. It will be a straight thriller with no ghosts or supernatural elements . . . but it’s all got the old Romano edge, man. There’s some really bloody, twisted stuff in there.  Be VERY afraid.