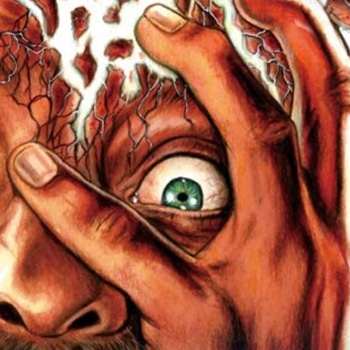 See that? It’s a picture of me screaming. That’s my life these days. I make a lot of books and movies and I scream a lot—usually at my computer. But some good work HAS been going down, in spite of what you may have heard about the world coming to an end and all. I mean, that IS happening, but yeah, I still get to make books and movies . . .

I’ve been working on getting this website out of the dark ages and updated all spiffy for the current techno-savvy THX1138 future, with all my new stuff out there and an easy-to-navigate design that doesn’t crash every time WordPress updates, so that also has been taking up oodles of too-much-time, AND as I was getting the final touches ready for the launch of the new site today, it occurred to me with more than a fair amount of blood freezing horror that I’ve hardly even mentioned PROJECT 51! WHAT THE FUCK!??? It’s only the most aweosmest thing I’ve done in fucking years, man!!!

Truth is, I live mostly* over at Eibon Press when it comes to being online, so there was a lot of talk about the project over there. That’s no excuse for neglecting the Express . . . or maybe it is, I dunno, I’m pretty stupid most of the time, what DOES ANYTHING MEAN ANYMORE ARRRGGGGGHHHH!!!!

See what I mean about yelling all the time? I just can’t help myself.

ANWAY . . . please HIT the ANNOUNCEMENT CARD BELOW to link to read my very first blathering about the project, way back in OCTOBER of 2020:

Now CLICK THE CARD BELOW to totally peek what happened next:

AND THEN . . . the project actually happened, and I HAD THIS TO SAY ABOUT THAT:

Some people are just fucking crazy.

Can I just say “fuck” again?

The long and the short of all this is that is that I made fifty-one short stories happen on my birthday, way back when I turned fifty-one in 2020! That was my birthday present to myself. I nearly went mad writing for twenty two hours straight. (I know, what the hell is wrong with me, right?) And almost one year later I published the book! We released it as a limited edition of just 351 copies and it sold out in less than 48 hours, which was super cool.

This project was special. I financed it myself, and I hand signed and packed each and every order to be sent out. My kitchen turned into PROJECT 51 central, as I plowed through each order and drove each carload of boxes to the post office personally. My kitchen table looked like this for a VERY long time:

Here’s me signing copies of the BROCHURE that were sent with every order.

This project meant a lot to me because it was getting back in the game of pure art for art’s sake, and it was a fun way to do it, because I reached out to the fans of our work at Eibon Press and asked them for story ideas, and they gave me some real gems to polish. Writing with them in that way and sending each book out personally (usually Shawn Lewis does the shipping in California) . . . well, it made me feel a lot more connected to eternity, not to mention akin to the people who really dig what I do. The die hards. The Eibonites. The PSYCHO FANS.

Just this morning, I put the final batch of books in the mail, all addressed to those special peeps.

The Project is now complete and it’s time to move on to other fun things. Like, for example . . .

My new crazy movie at Lifetime, TRIPLE THREAT . . . AKA FRAMED BY MY SISTER:

From the director of SHARKNADO, kids . . . and what more do you want than that?

Plus my next short story collection will bow in NOVEMBER, which will compile all six chapters of JULIA STARCHILD, along with a fistful of ALL-NEW stories which I can’t wait to share with you . . .

And if that wasn’t enough, NEXT YEAR will see the long-in-coming official mass paperback release of SAFE IN THE WOODS, my nastiest and most brutal novel, which was written as the first part of a trilogy of books set in the same “universe,” which also featured METRO and RESURRECTION EXPRESS. But almost nobody has ever read the first gasp from this universe. It actually got me in a lot of trouble, that book. So it’s perfect for Eibon Press, baby. Read all about it by CLICKING the cool new Eibon edition cover below:

As a very wise man once said:

Words to live by.

Meanwhile, get the mass market edition of PROJECT 51 at the jump below, and hang in there, kids. We’re all back in the fight, and we ain’t going nowhere . . .

*This asterisk is for those of you with no lives, obviously, but I’ll make it fun. See, when I typed “mostly” up there, Skynet automatically corrected my blundering fingers and the internet Terminators forced me to say “moistly.” I almost left that in because it made me laugh a whole damn lot. Then I came to my senses and added this footnote, for those who care. Do you care? Obviously. And I love you for it.