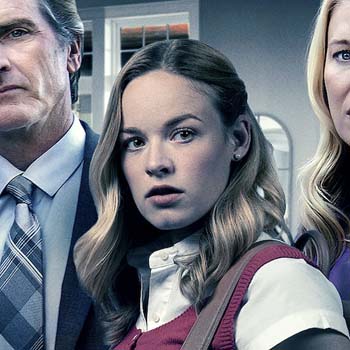 Time for more Lifetime melodrama from the Kid You Can’t Take Anywhere!

I’ve been lurking under the radar of The Girliest Cable Network On Earth for the better part of a decade now and we always have some fun, but THIS ONE I’m particularly fond of, because it breaks all the rules. Well, my rules anyway. There’s no obsessed psycho, no gruesome murders, none of what my producers at Reel One call “salacious fun.” What we have instead is a taut suspense story about a nuclear family torn apart by a brutal secret, which goes deep into the evils that humanity is capable of and the great love that can save us. Ugh. This is already sounding waaaaay too serious. But the truth is, SHE IS NOT YOUR DAUGHTER may be one of the most on-point emotional thrillers I’ve ever seen on Lifetime. I mean… if you’re into that sort of thing.

You always kinda know when a project is charmed going in. The script was both a challenge AND a joy to write. (That’s pretty rare, to be honest.) But I could not have anticipated the awesome director we would hook up with, Jeff Hare, or the incredible trio of actors who would play the Morton Family: Jon Briddell, Alicia Leigh Willis and the amazing newcomer Emily Topper, who plays the daughter of our title. (Emily projects so much “future star quality” that I know we’ll all be looking back years from now when she gets her Oscar, saying: “We TOTALLY worked with her on that silly Lifetime movie!”) As I watched the film come together during the shoot, everything went exactly the way things were supposed to go, everyone had a blast, and the final product is one of my proudest moments as a writer of these things. Did I mention that already? Guess I did, huh?

When you say the words “I write movies for Lifetime” in a room full of average citizens, you’re liable to get any number of reactions. I’ve had people light up and say “Oh I love those things!” (They’re usually older folks and/or young hipster types.) Other people look at you funny and back away slowly. (They’re usually older folks and/or young hipster types.) But here’s the thing: Anyone working as a writer in this industry is paying dues on a daily basis. You’re lucky to have gainful employment, much less on a motion picture that will be seen in so many international markets. And so you answer to a lot of people. Understand that, hipsters? This is a hard job. You may marginalize what we do as “best in class,” which is fair enough, and we DO have a sense of humor about all this. (Usually.) But we’re working just as hard as anyone else. We’re working our crazy asses off. The goal, of course, is to make you laugh, cry and throw things at your TV, but here’s the other thing: Like anyone else in this business, we are often not to blame when something in one of these movies is not exactly the way you think it should be. In fact, do me a favor and HUG A SCREENWRITER today. Believe me, they need one.

But, yeah, every now and then you get a bit lucky and something cool happens. I still have “thunderbolt” moments on these films. That’s when you’re watching a take or dailies or an audition, and some unexpected cosmic insight is delivered to you regarding your own story. You’ll be watching a great actor work your words and BOOM: The thunderbolt hits you. It takes on its own life. It becomes something bigger than all of us. It happened on my first film, way back in 2005, when I watched the great-and-powerful Ethan Embry give incredible inner life and terrifying sensitivity to a scumbag villain I had helped to write. (He was the scariest and most skilled method actor I have ever encountered on a set outside of Jack Nicholson.) It happened on my very first Lifetime film, way back in 2016, when Ari Zucker delivered a painfully authentic cry moment, begging someone to save her daughter’s life. (That was the first time I ever saw a woman so professional that she could make tears happen on cue three times in a row and make you believe they were absolutely real, while shaking it off instantly between takes.) And it happened on this film too. (You’ll know the scene when you see it. I promise.) That’s when you get reminded you’re still in the right line of work. That’s when all the naysayers and hipsters fade away and it’s just you and the thunderbolt. Yeah I’m damn happy to be here, folks.

And, of course, this is only one thing that I do. If you want something a little more nasty, read one of my books or watch MASTERS OF HORROR. You’ll be begging for Lifetime ladies when that’s done. I always tell people that working here keeps my artistic life balanced and I’m not lying. You can’t be pitch black all the time. It’s bad for you. I think my mother would agreed. She would have liked these families.

And I really love the Mortons. They make life a little brighter.

Speaking of the Mortons, we got their killer new poster in last week, which is pretty cool. Look how freaking adorable they are!

Anyway, the fun starts AUGUST 12 at 7pm on LMN!

Some fun trivia bits: My first film produced for Lifetime was WEB CAM GIRLS. The story begins with an alcoholic father telling his daughter not to “call the kettle black” when she chews him out for being drunk all night. In SHE IS NOT YOUR DAUGHTER, a very strait-laced non-alcoholic father tells his wife not to “call the kettle black” when she’s worrying about the family car. I like paying tribute to things that inspired me now and then, and sometimes I even reference myself this way. It’s fun! But here’s the bizarre and totally cosmic part: In BOTH FILMS, the “kettle black” father just happens to be played by THE SAME ACTOR! And they are both favorite films of mine! How cool is that? Watch them back-to-back and share the warmth. Or something. Anyway, Jon Bridell totally rocks.

More Trivia, this time for horror/sci-fi nerds only: All the good guys are named after characters from the films of Lucio Fulci. We have Liza and Jill from THE BEYOND, Bob from GATES OF HELL, May from HOUSE BY THE CEMETERY. (There’s also an Ann, a Mary and a Paul Frezza.) In a double whammy, I named my beleaguered family The Mortons, so that the dad could be Bob Morton. Anyone know why that’s a nerdy shout-out? (No? Google is your friend, maestro!) Auntie Faye is a reference to one of my own short stories. And I planted a few other very special “Easter Eggs” that made it into the final cut. Watch and listen carefully. There may be a very subtle shout out to RE-ANIMATOR in there. (There was a much more direct one in WEB CAM GIRLS.) In an even bigger irony, one of the actors tried to slip a reference to John Carpenter’s THE THING into a scene (which was a shout-out I had nothing to do with) but it was cut from the final film. Ah, Hollywood!

The film is produced by the amazing Ken Sanders, who has helmed many of the best films yet made from my scripts at LMN, including my favorite, which is still ESCAPING MY STALKER, made in LA in 2019. My other faves are WEB CAM GIRLS (duhh!), NEXT DOOR NIGHTMARE, DEADLY INFLUENCER and this one. You can buy a digital copy of each one for just four bucks and change right here at AMAZON PRIME.

I’ll be back with a TV trailer and some other fine anecdotes when SHE IS NOT MY DAUGHTER airs next month, but for now, MARK IT: