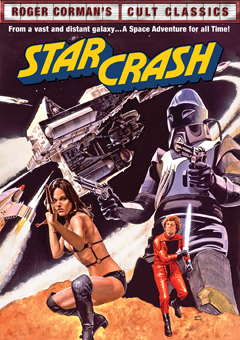 After thirty years, ROGER CORMAN’S CULT CLASSICS series presents the definitive video release of Luigi’s Cozzi’s notorious Italian STAR WARS/BARBARELLA mash-up, the one-and-only holy grail of “high class” exploitation films, STARCRASH!  I am the co-producer of this lavish TWO DISC SPECIAL EDITION, featuring an all new high definition digital transfer of the film from the vaulted negative and a Dolby 5.1 soundtrack to rock your home speakers, re-mastered from the film’s original 4-track Dolby Stereo sound masters. I am a “known authority” of sorts on STARCRASH, having written the definitive “making of” book about the film (which was ultimately never published due to legal problems), and I brought some of that of knowledge and rare memorabilia to this special edition DVD set.

As a result, the special features section is exhaustive and all-inclusive, including rare behind-the-scenes footage, interviews, production art and designs, an all-new 30-minute feature on the remarkable in-camera miniatures and stop motion sequences, created expressly for this release by the film’s effects director himself . . . plus international trailers, TV and radio spots, and commentary by Joe Dante, Eli Roth and Stephen Romano, detailing the remarkable history of the film’s production.

Yeah, guys . . .this project is something very near and dear to my cold black heart.  I’m really honored to be elected the official spokesperson for this historic video release.

Over the years I have collected enormous amounts of STARCRASH stuff, including some really rare original artwork from Drew Struzan, who was originally set to be the film’s poster designer. That’s all in the disc, along with a ton of other stuff. I wrote the book, you know—literally—so I do TWO full length commentaries on the film itself, in which I reveal some juicy gossip and little-known facts, all basically drawn from my research on the film. STARCRASH is one of my five favorite movies of all time. I saw it as a kid when it first came out and was just blown away. It’s aged into the future as a classic in camp, and there’s certainly no denying that it’s a very tongue-in-cheek affair. I mean, I laugh out loud along with everyone else, that’s part of the film’s appeal. But what people have never been able to take away from the experience of watching STARCRASH until now is that it’s actually a pretty classy affair. When you stack it alongside other lower budget sci-fi efforts of the day, it’s got a LOT going for it in terms of style and visual elegance.

The people who worked on this movie were Oscar winners, man! They even got John Barry for the score! The inferior video transfers from the old tape versions of the eighties have betrayed a lot of that elegance… but now you get to see it in crystal clear focus for the first time since it was in theatres, with all the wild colors and great sets in sharp focus, and the sound is better than ever. They released this film in Dolby back in 1979, which was very unusual for a Roger Corman title. So it’s gonna blow you away, I promise. Our goal with this release was to preserve a moment in history and pay this film the respect it deserves. We’ve given it a two-disc treatment which is just as reverent and jam-packed as any ‘Criterion’ edition you can name. That’s because classics come in all shapes and sizes, man . . . and STARCRASH rocks!