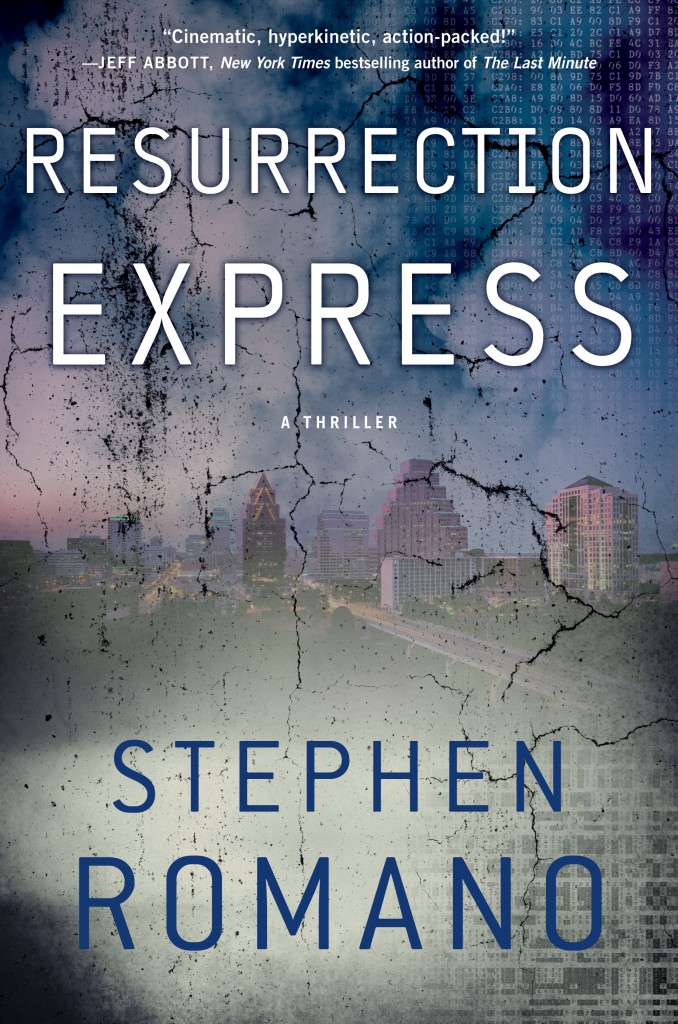 My debut thriller from Gallery Books at Simon and Schuster is getting the star treatment from the publisher, complete with a snazzy new cover that looks like it belongs front and center at the airport bookstores.  It’s kinda yummy, if you ask me, and makes my nasty fast action extravaganza look real respectable—even though everybody knows you can’t take that naughty Romano guy anywhere.

I’m not resting on my laurels either.  The sequel to this bad boy is already in the works, even as the raves roll in.  We’re getting some great advance praise from some real heavy hitters, which will be on the book jacket.  To say that I am shocked and amazed would be a galactic understatement.  I’m a little speechless, actually.  So I’ll just the boys speak for me:

“Stephen Romano’s imagination is so scary-brilliant, you should be required to obtain a controlled dangerous substance license before opening RESURRECTION EXPRESS.”

Compelling, devastating and brutal, with battle-hardened prose and relentless energy, Stephen Romano has crafted one hell of a first novel. A juiced-up, whacked-out, back-to-the-wall book that reads like a ride through the Knife and Gun Club on the night of a full moon, riding the Resurrection Express will leave you dizzy from betrayal, speechless from reversals, and quite possibly battered and broken by its revelations.

Stephen Romano’s taut prose is as unrelentingly violent and brutal as the story he tells. Resurrection Express is a killer debut that demands attention. A scorching read.

“Stephen Romano steps into the ring with lead in his gloves and a razor in his boot. When you read Resurrection Express you can’t help but take your eyes off him as the pages fly by–and then he’s got you.”

“A high-voltage blast!  Romano’s action scenes are light years ahead of the pack, fueled by muscular prose, terrifying villains, and Elroy Coffin–a protagonist for the ages. RESURRECTION EXPRESS is one of the finest examples I’ve encountered of noir’s evolution into the 21st Century.”

“RESURRECTION EXPRESS is a rip snortin’ white knuckle ride. It’s a page-turner that sinks its teeth into you and won’t let go. Stephen Romano has created a meal you will want to swallow whole, it’s that hard to put down. His damaged protagonist, Elroy Coffin is a compelling computer freak with criminal skills who you can’t help but root for. Resurrection Express is a savage and vicious little tale that fans of Don Winslow will lap up. Highly recommended!!”

Don Coscarelli, award-winning director of Phantasm, The Beastmaster and Bubba-Ho-Tep

“RESURRECTION EXPRESS whipsaws along at 100mph, with so much momentum that the reader feels if he hits one bump, he’ll go straight through the windshield.”

I want to thank each of these amazing guys for talking time out of their busy, busy, BUSY schedules to read my humble endeavor, and give me a leg up.  Most of you don’t even know me, so this sort of unanimous praise really means a lot.  And it may or may not sell books, too, so hot damn!  THANKS, GUYS!

GET ON THE EXPRESS, BITCHES!