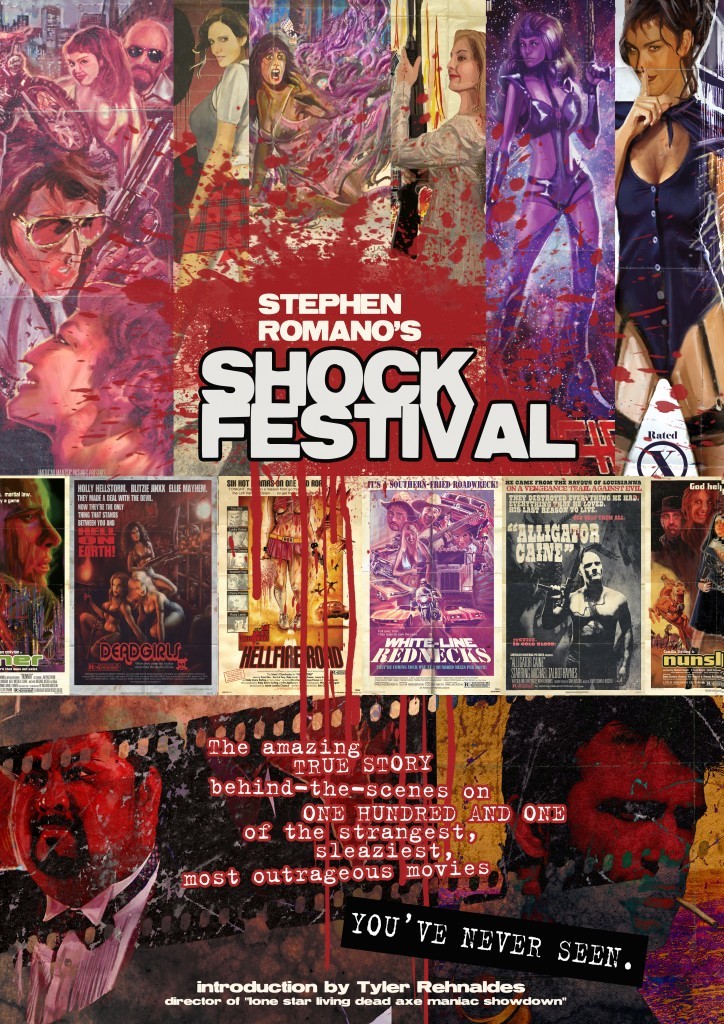 It’s the retro-dazzle of GRINDHOUSE meets the authentic ‘mockumentary’ appeal of SPINAL TAP in over 350 full color pages! From wild monster flicks like UNIVERSE OF BLOODY ZOMBIES; to the streetwise blaxploitation of CHOCOLATE CHERRI ON TOP; this illustrated epic is guaranteed to tingle the most jaded movie geek’s palette.

The book is illustrated with over 600 faux posters, lobby cards and "memorabilia items," all tracing a wild cast of characters behind the scenes, which you meet as the story of the production of each film unfolds, with the wild and crazy actor-turned producer ROC BENSON in the center of the action, first appearing in cheapjack exploitation movies of the late sixties and early seventies: 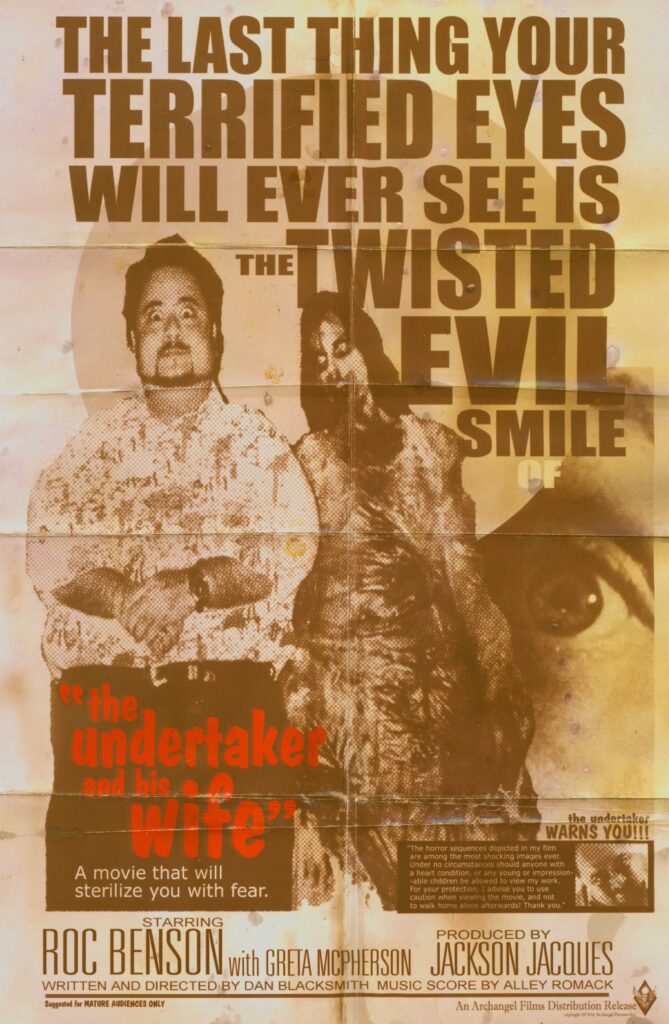 As the book moves through several ages of Grindhouse and drive-in cinema, every genre is represented, and no punches are pulled, leading into the book's most controversial and politically incorrect subjects, described by author Romano as "An examination of the undeniable social issues presented by some of the sleaziest movies ever made, where I get to ask important questions while telling a profoundly epic and completely in-your-face story about crazy people on the fringes of Hollywood, who might have ruled the world . . . um, had they not been so crazy." 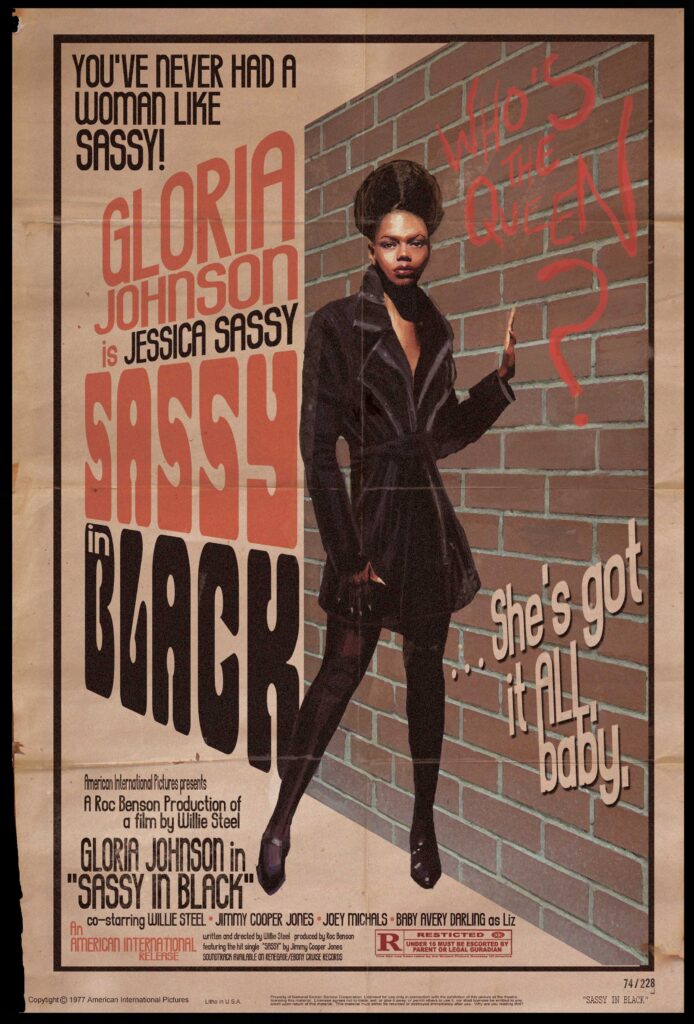 The devil is in the details, as they say, and SHOCK FESTIVAL doesn't skimp, providing hundreds of scraps from this alternate reality of sin cinema, including ticket stubs, film reel canisters, and newspaper clippings of ads for many of the films discussed, which as this one for STARFIRE BEYOND THE GALAXY, inspired by Romano's favorite real-life "space-pliotation" movie STARCRASH.

You'll swear you actually saw a few of these films, as many of the posters created for SHOCK FESTIVAL mix and match real elements of existing iconic art in a mind-blowing retro-collage effect, such as this one sheet for CRAWLING SLIME FROM DIMENSION X, inspired by the poster of GODZILLA VS. THE SMOG MONSTER: 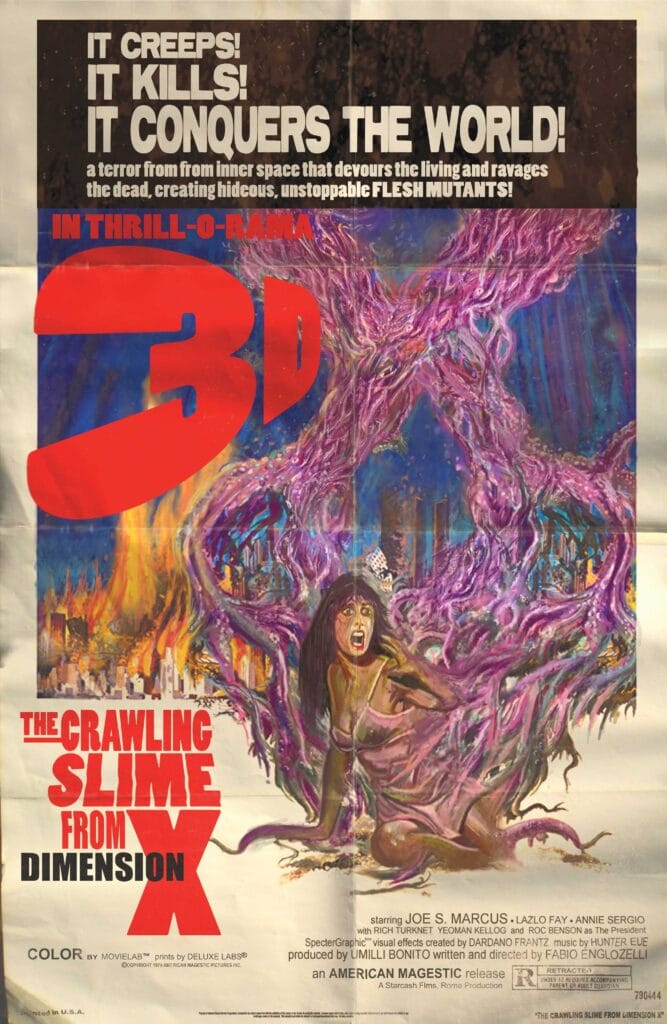 The real-life classic GRIZZLY gets an upgrade too, reinvented as a supernatural horror story about a zombie bear on the loose! 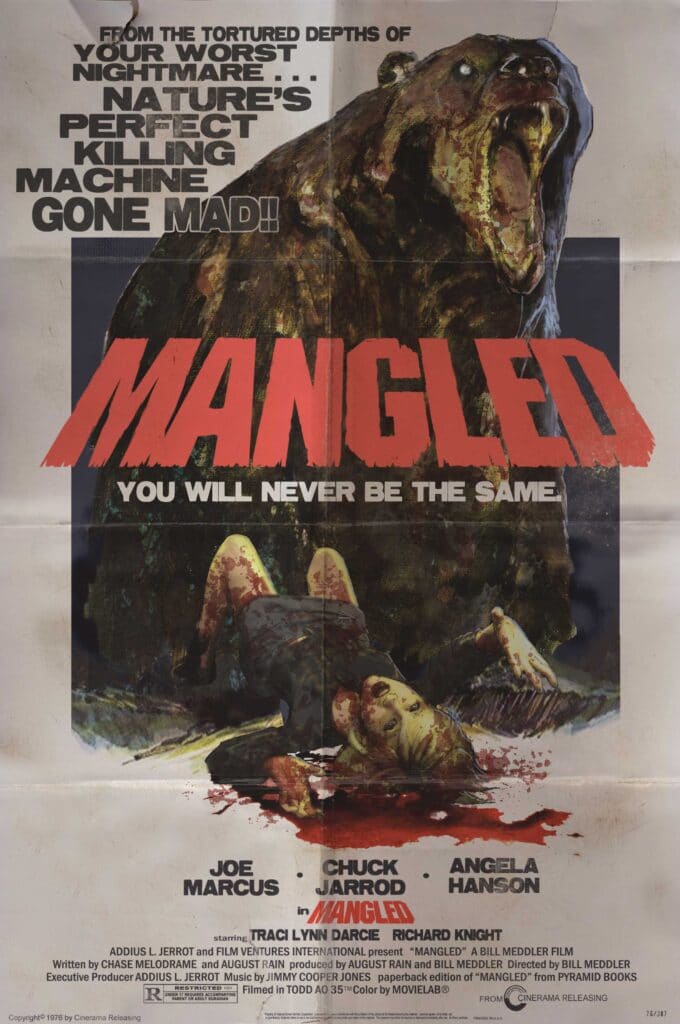 And each chapter is not just pretty pictures. It's an entire ILLUSTRATED NOVEL, brimming with jaw-dropping tales of the most wicked operators ever to roll film on a movie set, and bizarre mysteries, such as who really made THE SNARLING FANGS OF THE PSYCHEDELIC WEREWOLF, a bizarre rock and roll horror comedy inspired by THE INCREDIBLY STRANGE CREATURES WHO STOPPED LIVING AND BECAME MIXE UP ZOMBIES: 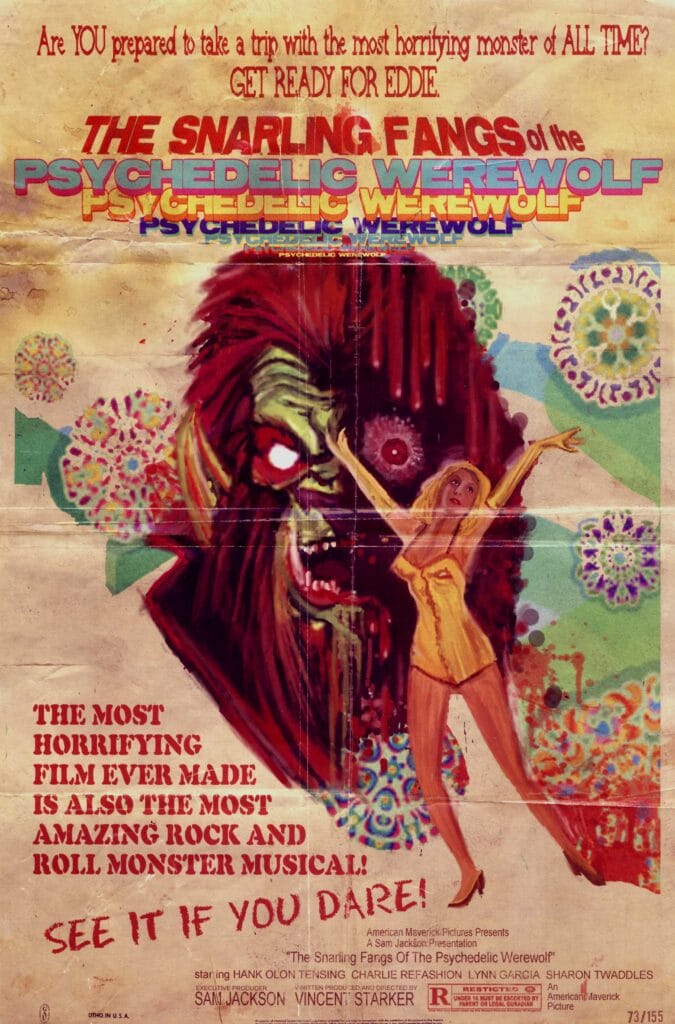 A few real-life stars stars are on display too, such as Thomas Jane and the lovely Ashley Laurence of HELLRAISER, playing Russian sex kitten Natalie Ustinov: 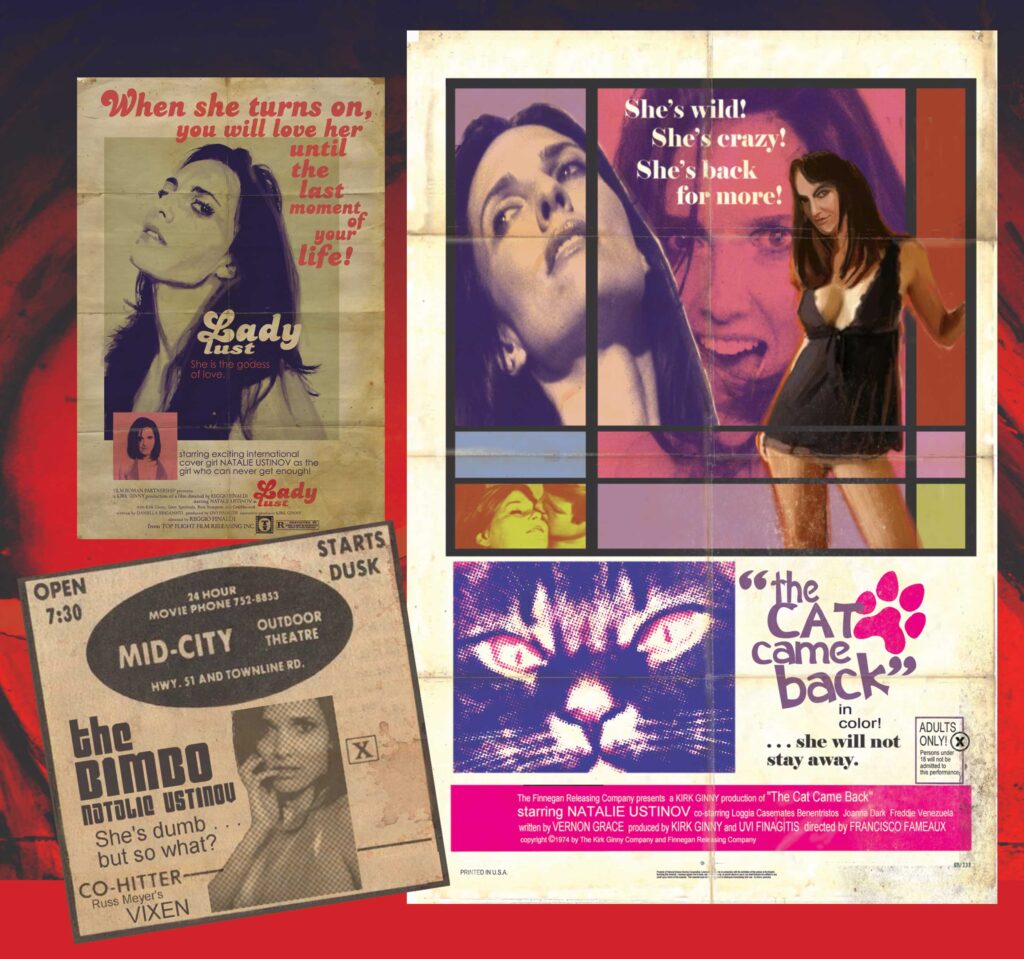 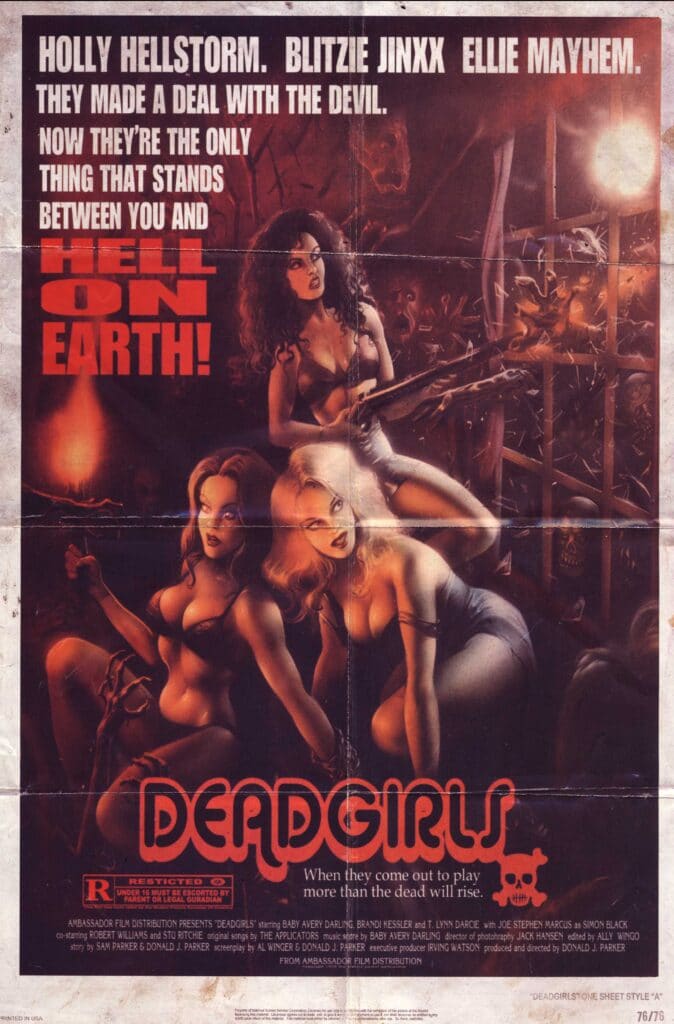 Even the COMPOSERS of these films are given the due, with behind-the scenes tales of how their scores were recorded and proof that the soundtrack albums were actually released in Japan! 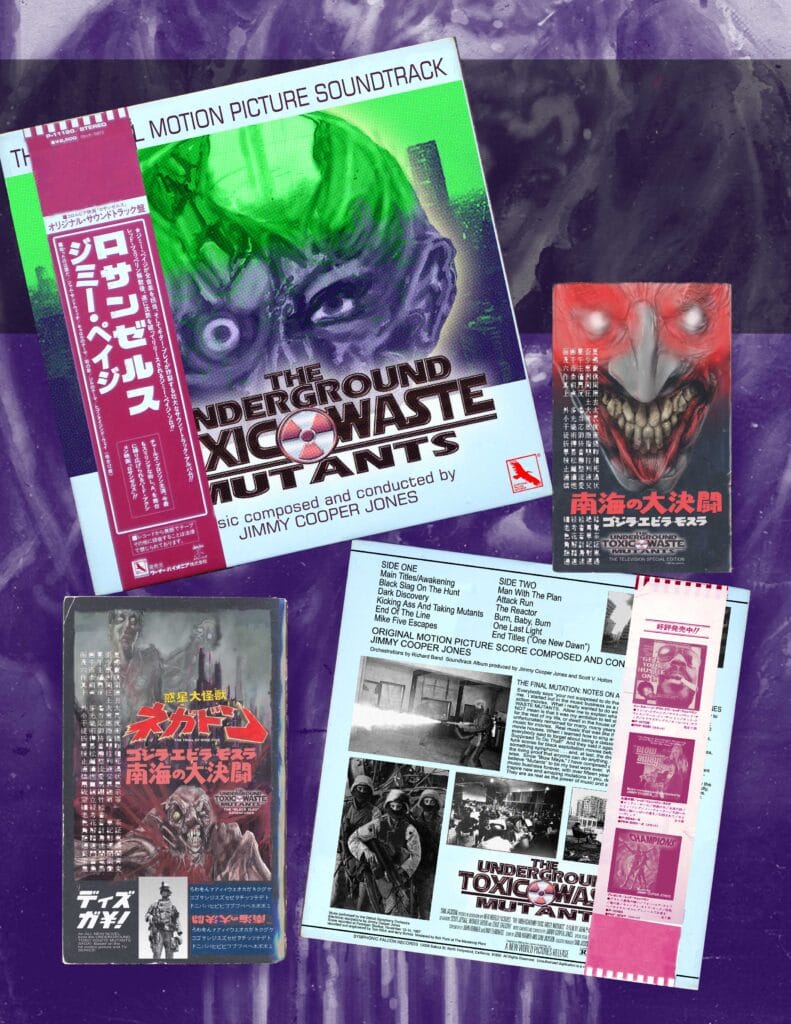 Remember the super-cool officially-licensed movie makeup kit they sold in toy stores when THE AMAZING MUTATING FREAK came out? Sure you do . . . 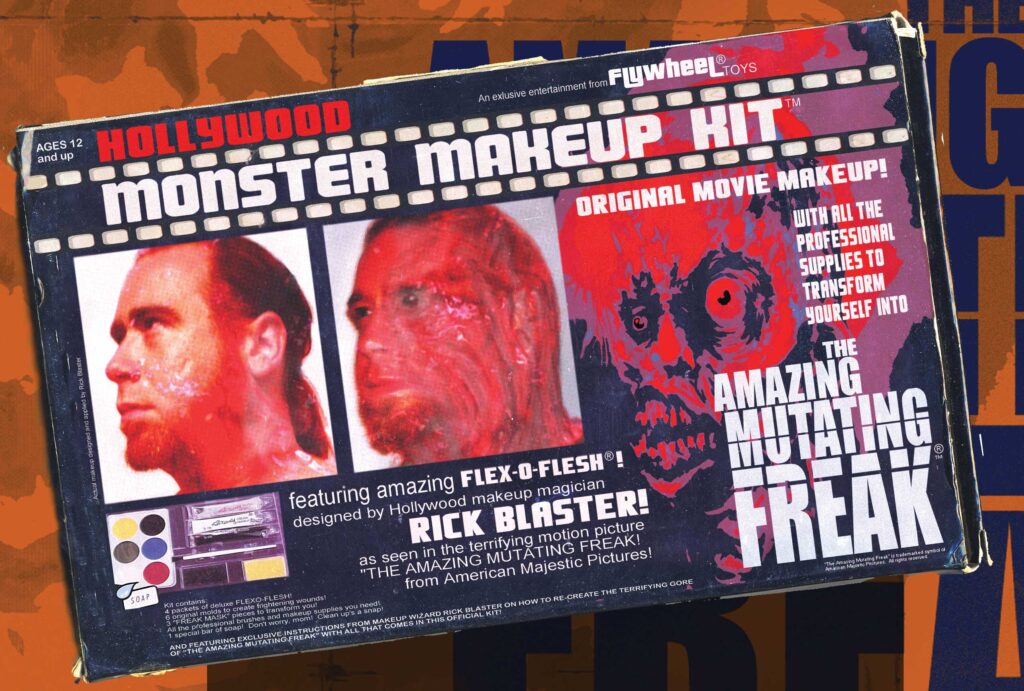 And that awesome sci-fi flick from the mid-eighties starring crossdressing action hero Elliot Swann as Nathan Oblivion?  Heh.  Of COURSE you remember that . . . 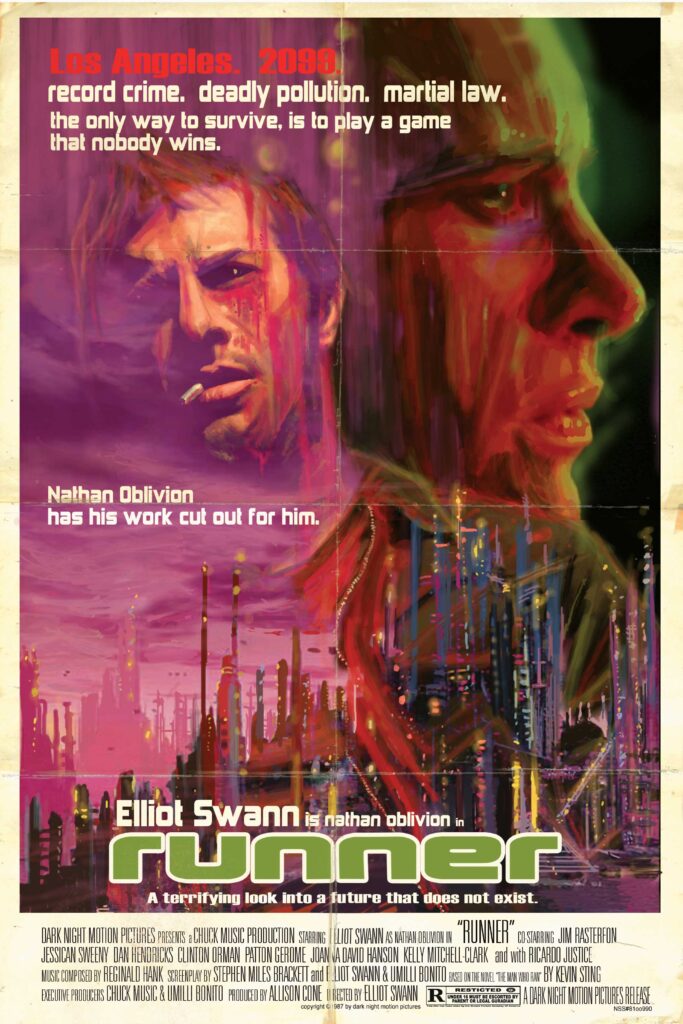 And don't think we forgot about X rated adult animation movies, either!  The crazy tale of how THAT FUCKIN' CAT! was made with keep you in stitches for days. 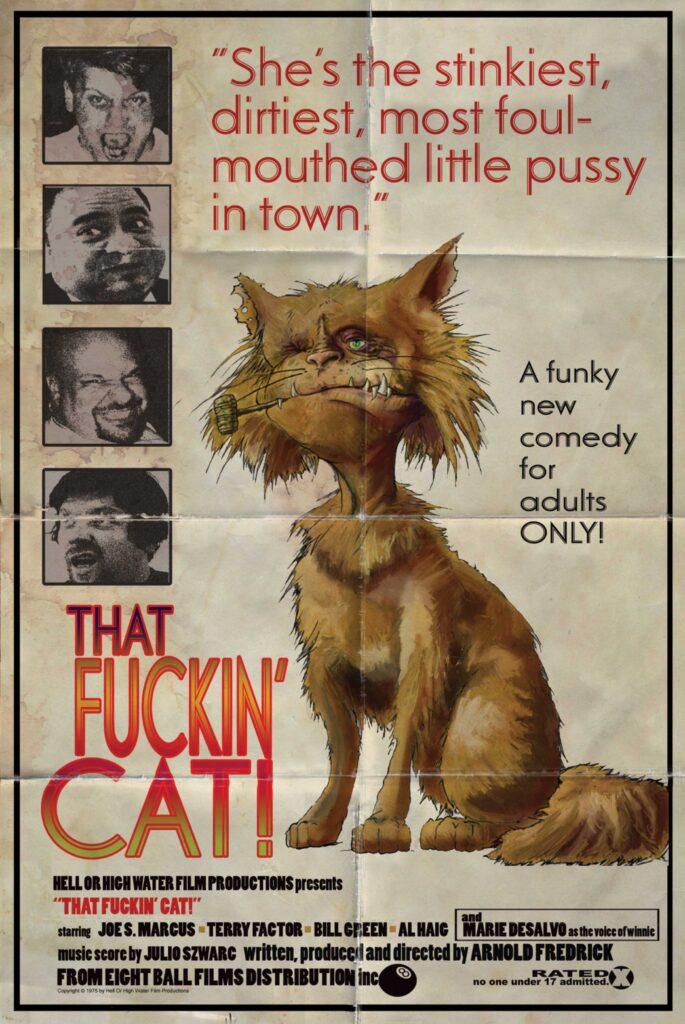 Long out of print, the original edition of SHOCK FESTIVAL can STILL BE FOUND USED AT THIS LINK, and if you can find a copy, keep it close.  A whole other world exists within those pages.  A world of psychos and madmen and cannibal freaks... and those are the FILMMAKERS!  Check it out, kids!  It's guaranteed to SHOCK YOU. 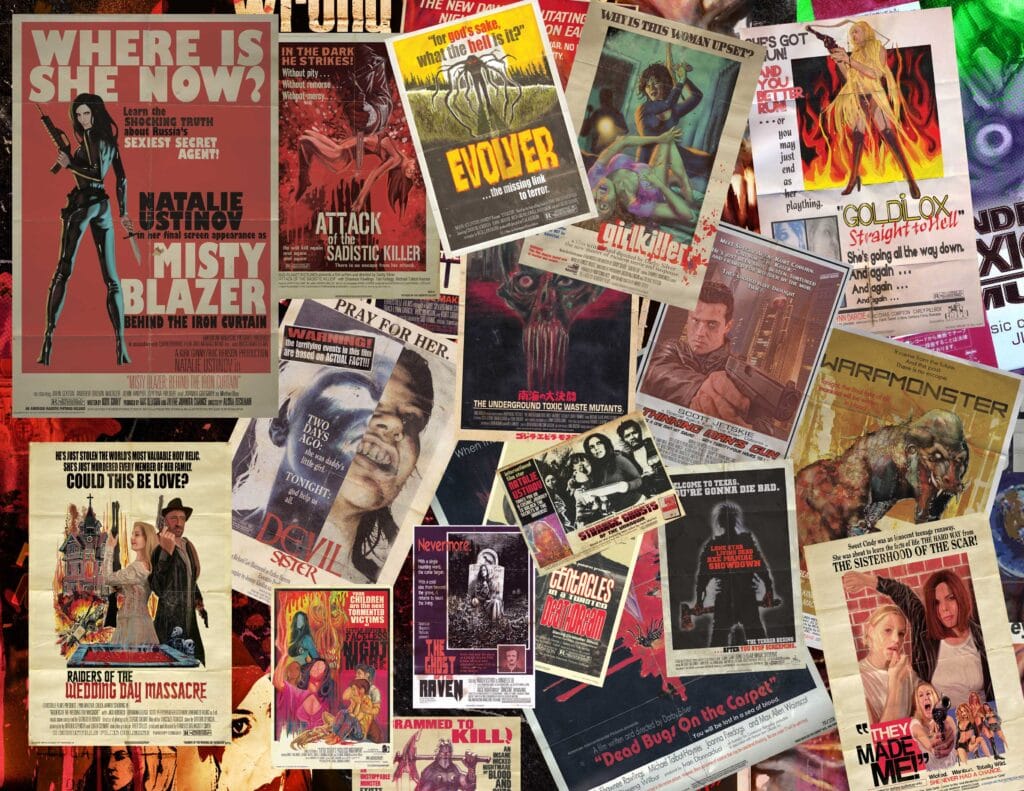